Fitness fanatics have raised more than £11,500 for Midlands Air Ambulance Charity which will fund 12 missions and help save many lives across Shropshire.

The charity’s Airbase Challenge, which originally launched in 2021 as part of the its 30th anniversary celebrations, saw participants jog, walk, swim and cycle their way around four distances ranging from 27 to 121 miles, representing the mileage between the charity’s three airbases at Tatenhill Airfield in Staffordshire, RAF Cosford in Shropshire, and Strensham Services on the M5 in Worcestershire. The challenge returned in 2022 with more fitness fans taking part and challenging themselves to get physical.

Supporters had 30 days to complete the activity which they could do as an individual or as part of a group, and together they pledged to cover more than 4,000 miles.

Emma Wood, head of fundraising and marketing for Midlands Air Ambulance Charity, said: “We’re incredibly fortunate to have dedicated supporters who came out in full force to throw their support behind this year’s Airbase Challenge. We’re thrilled that those who took part have raised such an impressive amount of money which will make a real difference to our charity and our lifesaving work across Shropshire.”

To find out more about Midlands Air Ambulance Charity, visit midlandsairambulance.com and follow the organisation on social media. 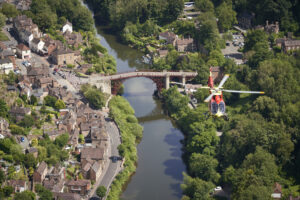