Previous Next
A new chapter for influential former student

A former local student who is a speaker and ambassador for people with learning difficulties, has added ‘author’ to his remarkable CV.

Richard Keagan-Bull, who now lives in London, spent 17 years as a student and client at specialist further education college Derwen College, in Gobowen, He has written and published his life story, an emotional, inspirational, and often amusing journey from birth to present day

Richard Keagan-Bull has written his autobiography ‘Don’t Put Us Away’ with the help of long-term friend, personal secretary and travel companion Hazel Bradley.

Written in his own words, Richard’s story starts when he was born in 1971, with the heart-breaking words that his mother was told by a geneticist about him and his brother: “Put them away. They’ll never do anything.”

The book follows his life path through school, before moving to Shropshire to become a residential student, then a client, at Derwen College, before returning to London and becoming part of L’Arche, an organisation which provides communities for people with learning difficulties.

Since leaving Derwen College and returning to London in 2006, Richard’s life took an entirely different direction. He found he had a talent for speaking up about what he believed in, and has become a speaker and ambassador for people with learning disabilities. He has his own flat, a job as a research assistant at Kingston University, London and has travelled the world; visiting, among other place, Austria, India, Italy, America, Jamaica, Canada, Ghana and Colombia.

He has been named one of the top 100 most influential disabled people in the United Kingdom. He is proud to have unequivocally proved those early medical professionals wrong.

‘Don’t Put Us Away’ is written in Richard’s own words, and chronicles his life in a very personal way. There is humour, strength, trauma and even anger all expressed with refreshing honesty in what is, importantly, his own voice.

During his time at Derwen College, near Oswestry, he was a student, then a trainee working in the kitchen and coffee shop. He spent 17 years at Derwen, meeting his first girlfriend (and second and third), becoming engaged and learning skills for life. He tells it like it is, the highs and lows, including an amusing and descriptive anecdote of losing his temper and pouring a commercial sized tin of peaches in syrup over a fellow trainee’s head!

In the book, he says: “I’m always very proud to say I went to the Derwen College in Shropshire, I did. I spent 17 very happy years there, I did, and made many good friends. I learnt about life there, about being independent, being always on time for work, what the world is like, to always dress smart and all that.”

He says: “I want people to say about my life, he used to make us laugh, he did. Sometimes he could be a bit annoying, a bit of a nuisance, but most of the time he had a good sense of humour, he did, and he could light a room up. My gift is that I can stand up for people with learning disabilities who are less able than me and say how it is.”

Richard will be visiting Derwen College on 17 January to talk to students, clients and supporters about his life and work.

“A huge amount has changed at Derwen College since Richard was a student here, but our mission to empower students to live the lives they choose, remains the same. Richard is a wonderful ambassador for people with special educational needs and disabilities. And we look forward to welcoming him back to College to hear more about his remarkable life.”

Richard’s book, Don’t Put Us Away, is available to buy at Derwen College Garden Centre and Gift Shop, Booka Bookshop, in Oswestry, and through Amazon. It is published by Critical Publishing, priced £18.99.

For more information about Derwen College, Derwen College Charity or the public Derwen Marketplace shopping and eating areas visit the website at www.derwen.ac.uk or telephone 01691 661234. 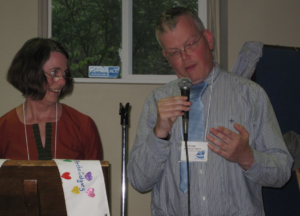