A community garden set up by OsNosh has won two awards in its first year.

The community interest company, based at The Centre in Oak Street, Oswestry, is using land around The Centre and its roof terrace to grow fresh ingredients for its community kitchen, and to educate local people in sustainable gardening skills.

It is an integral part of the OsNosh campaign to get the local community involved in every aspect of the food cycle – from field to fork and round again.

The community garden has been rated as outstanding in the Royal Horticultural Society and Heart of England in Bloom It’s Your Neighbourhood national awards for 2022.

The garden also impressed locally, winning the Oswestry in Bloom 2022 category for the best community premises or project.

OsNosh director, Elliot Bastos, said that the two awards had been an amazing feat for the garden’s first year.

He explained that setting up the community garden alongside head gardener Lesley Wills has been a natural progression for OsNosh.

“The garden allows us to involve local people in reducing food waste through composting, whilst providing food and the knowledge of how to grow it to help fight food poverty and inequality.

As well as running a community café, distributing over 1,000kgs of surplus food a month and providing cooking education for disengaged young people, OsNosh puts on a garden club every Thursday from 10am to 12pm.

The garden is open to everyone with lots to learn and get involved with including seed saving, building compost, sowing seasonal crops, no-dig growing methods and food forests.

Further information about OsNosh and how to get involved and donate can be found at https://osnosh.co.uk/or on Facebook at OsNosh – Oswestry Community Kitchen. 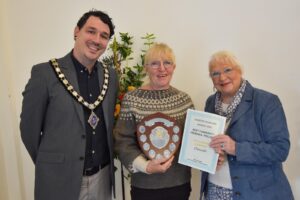