A local construction firm has handed out a string of accolades to its staff in recognition of their achievements during the year.

Pave Aways, which is based at Knockin, presented special awards recognising its top performers at its annual staff Christmas party at Shrewsbury Town Football Club on December 3.

Architect and Design Manager Keeley Fox scooped the Neil Holding Award, which is given in memory of the firm’s former quality manager who died after a battle with acute lymphoblastic leukaemia. It recognises an employee who goes above and beyond their role and was chosen by the firm’s board of directors.

A belated presentation for the 2020 Neil Holding award was made to Finance Manager Charlie Davies for her dedication during the covid pandemic.

Managing Director Steven Owen said the awards were extra special as last year’s celebration couldn’t be held and no awards were given.

“The last 18 months has been incredibly challenging for the construction industry with the coronavirus and lockdowns. Being able to gather our team together in one place and say thank you for their hard work was particularly poignant.

“Choosing the recipients for the annual awards is always a tough choice but Dan, Kevin, Keeley and Charlie all go the extra mile. Simon is hugely respected by his colleagues and was a well-deserved winner of Colleague of the Year.” 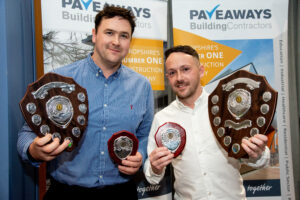 Pictured: Site managers Kevin Bowden and Simon Gough, who were named as Pave Aways’ Employee of the Year and Colleague of the Year at its annual awards.