As part of Aico’s ongoing commitment to CSR through their Aico in the Community initiative, colleagues at the Oswestry-based company have recently taken part in the Midlands Air Ambulance Charity’s (MAAC) Store Stars challenge to raise vital funds and encourage volunteers to aid this great cause.

MAAC operates and funds three air ambulances covering six Midlands counties including Shropshire, Gloucestershire, Herefordshire, Staffordshire, Worcestershire and the West Midlands. Aico were delighted to become corporate partners with the charity and support their ongoing effort throughout 2021 and 2022.

MAAC Store Stars challenge invited groups of four from local businesses to their charity shops across the Midlands to build an eye-catching window display that would entice donations and volunteers. Groups were given a morning to build their masterpieces and an afternoon to raise as much money as possible for the charity. Three teams from Aico took part over three weeks, team one built a display based around prize give aways and members of the community leaving Christmas messages for their loved ones. The second team put on a bake sale, held a raffle and encouraged shoppers to guess the number of stars in their helicopter themed display. Finally group three built an inflatable Santa display whilst encouraging members of the public to leave messages for their lost loved ones. Together, Aico’s teams to raised over £2,300 for MAAC at a time when funds are needed more than ever.

Aico’s Operations Coordinator Ryan Evans who took part in the challenge was delighted with the outcome and commented “It was great to be involved in the MAAC Store Stars competition recently. The idea of designing a unique window display, and fundraising ideas for the store was testing but very rewarding. It was good to be outside my comfort zone and I thoroughly enjoyed the entire day. The volunteers at the store were very helpful and a pleasure to work with, I feel very privileged to be able to aid the charity”.

MAAC’s Partnerships Executive Abbie Hawkins who oversaw the challenge added “The Midlands Air Ambulance Charity’s Store Stars competition has been a great opportunity to provide volunteering for our charity shops during the busiest time of the year, whilst enjoying some festive team building fun. Aico were outstanding participants and really helped to make our first ever Store Stars a success. Veronica Finney was our judge, Logistics Coordinator at Signtech. Signtech are specialists in designing and creating bespoke shop signs, window graphics & vehicle graphics. They’ve been in the industry for over fifteen years and have a wealth of knowledge when it comes to design and visual displays. Veronica described the displays as “cute, cosy and professional!”  and the three teams taking part raised an amazing £2,309.75, which equates to eight lifesaving, critical care car missions.”

For more information on MAAC and to find out how you can help, please visit: www.midlandsairambulance.com 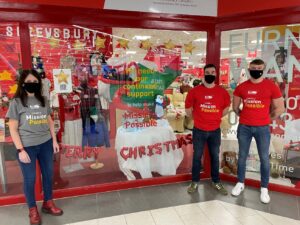