All systems go for festive fun!

Previous Next
All systems go for festive fun!

It’s beginning to look at lot like Christmas for one local charity with cards, calendars and community events already selling well.

Lingen Davies Cancer Fund is no stranger to preparing for Christmas time months in advance and this year proves no exception. The charity, which supports people going through cancer treatment at the Royal Shrewsbury Hospital, and in the wider communities of Shropshire, Telford & Wrekin, and Mid-Wales, has launched sales of cards, its ever-popular annual calendar, raffle tickets, and the chance to take part in some fun events.

Shoppers can choose from various card designs which are available on the charity’s website as well as from the annual sale in St Mary’s Church in Shrewsbury. The 2022 charity calendar, which was sponsored by FormForm Architecture in Nesscliffe features striking scenes of architecture and iconic buildings throughout the region, captured by camera enthusiasts who entered the charity’s summer competition.

A varied events programme has been launched for the festive season delivering something for everyone. Including Abbeyfest, a beer and gin drinks festival held in the iconic surroundings of Shrewsbury Abbey on Friday and Saturday 26th and 27th of November, it will feature local distillers and brewers, food stalls and live music. Also, the Shropshire Santa Run will be filling Oswestry’s Streets with Santas of all ages on Sunday, December 5th, taking part in the 5K funrun to raise money for the charity. Finally, it wouldn’t be Christmas without a traditional carol concert featuring a range of local choirs, also to be held at Shrewsbury’s Abbey on Saturday, 11th December.

Lizzy Coleman, events officer for the charity, said: “Christmas delivers some really important fundraising for us, it is the most fast-paced time of the year and I think that’s true for most charities, but the volunteers and supporters’ eagerness and excitement for things like Christmas cards and our annual calendar makes what’s already a special time of year, even more so.

“Our Christmas events calendar is looking really exciting and we’re looking forward to a slow return to normality, being able to raise spirits and funds for a worthwhile cause,” she added.

Find out more details on the charity’s website: www.lingendavies.co.uk 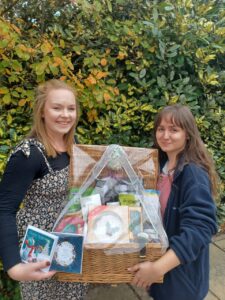 Pictured: Lizzy Coleman and Nieve Murray from Lingen Davies with a selection of cards on offer, and a brilliant hamper that is available to win through the annual raffle.