A campaign to recognise the hard work and support of dedicated NHS staff has been launched to celebrate those who go ‘above and beyond’.

The fundraising team at Lingen Davies Cancer Fund has unveiled an Outstanding Staff Award category as part of its annual award celebration taking place on Tuesday, 12th July. The charity supports and enhances cancer services at the Lingen Davies Cancer Centre based at The Royal Shrewsbury Hospital. The Centre itself caters to more than 4,000 new patients every year who travel for treatment from throughout Shropshire and Mid Wales.

Members of staff and patients are now invited to nominate patients and fellow members of staff who go above and beyond in their role, are highly efficient, effective, personable, helpful, and deliver an outstanding contribution to their department – whatever their role may be. Nominations have already been pouring in.

Naomi Atkin, CEO of Lingen Davies Cancer Fund, said the award has been introduced as a tribute to the dedicated staff working in the Centre itself.

“We hear from supporters and patients daily about the excellent care and service they receive when they visit the Centre for treatment. We wanted to do something to publicly thank everyone, forms are available in the Centre and the fundraising office, and voting is anonymous.

“We’ve had some wonderful feedback from staff and patients already about the award and we hope to hear from many more people who wish to nominate a co-worker, or someone who has given them care and support exceeding all expectations,” she added.

Louise Killey, Radiotherapy Manager at the Lingen Davies Cancer Centre, said the award was proving popular within the Centre.

“It’s lovely to see the work of the hardworking Centre staff recognised in this way, it’s tremendously positive for morale, and we are very grateful to everyone for their nominations so far,” she added.

Anyone who is unable to access a physical form can email hello@lingendavies.co.uk stating the name of the person they wish to nominate, and why they are deserving of the award.

The deadline for entries is Monday, 20th June, and the winner will be announced at the awards evening. If people would like to attend, they should email hello@lingendavies.co.uk

For further details about the charity and its work to raise awareness about cancer in the community visit the website www.lingendavies.co.uk 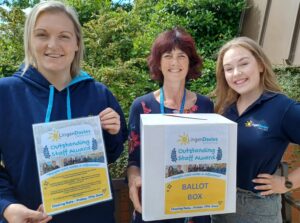