Oswestry home safety company Aico has been crowned Shropshire Company of the Year for a second time, on a night of huge celebration at the county’s annual business awards.

The company won three trophies at the Oscars-style event, which was organised by Shropshire Chamber of Commerce and held in front of nearly 600 business people at Telford’s International Centre.

Aico is the first company in the event’s 22-year history to retain the top award, and only the third business to be crowned Shropshire Company of the Year more than once. It also won the sustainability and young business person trophies.

There were also awards for the county’s business broadcast channel Shropshire Business Live TV which was named best new business, Wellington-based PR company J&PR which won the Covid response prize, Shrewsbury Colleges Group for wellbeing in the workplace, and Oaklands Farm Eggs of Ellerdine for innovation.

The John Clayton Award, named after a former Chamber president and recognising someone who has made an outstanding contribution to the local business community, was given this year to Shropshire Homes founder Howard Thorne.

And there was also a special surprise ‘This Is Your Life’ presentation for Shropshire Chamber of Commerce’s chief executive Richard Sheehan, to mark his 15 years of service with the team.

Former world heavyweight boxing champion Frank Bruno was guest of honour, and spoke about his legendary tussles with Mike Tyson, and the foundation he has created to fight back against the stigma of mental illness.

Chancellor Rishi Sunak recorded a special video message for the event, expressing his gratitude to the Shropshire business community for the way it has dealt with the challenges in the economy over the past few years.

He said: “I want to give a huge congratulations to all of you in the Shropshire business community for the way that you have dealt with all the challenges that have been thrown your way over the past couple of years.

“You have done absolutely brilliantly, and I am enormously grateful.

“A huge thank you to the Shropshire Chamber of Commerce for making these awards – the Oscars of the business community – such a success over the past couple of decades.

“It’s so important that we celebrate business success, and I’m absolutely delighted that that’s what you are doing tonight.” 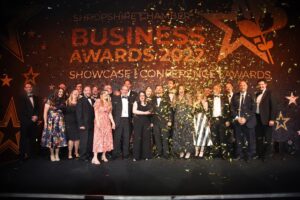