An award-winning film and TV stuntman will be appearing at Oswestry’s Kinokulture later this month as part of a roadshow of events to promote his new autobiography.

Justin Pearson, who was born and raised in Shropshire, has just published his autobiography, Rolling With The Punches, spilling the beans on his 20-plus years in the industry.

Kinokulture will be showing the film, One Way To Denmark on January 20 in which he has appeared – followed by question-and-answer sessions with Justin, hosted by BBC Radio Shropshire’s movie show presenter Carl Jones.

The three-time Screen Actors Guild award winner will also be meeting fans and signing copies of his new book at the venue.

Justin is one of the UK’s most in-demand action men. From huge franchises such as Star Wars, James Bond, Harry Potter, Fast & Furious and Pirates of the Caribbean to cult TV shows like Game of Thrones, his CV is a sparkling list of the world’s biggest productions.

From his early days as a prizewinning horseman, through globe-trotting exploits on the medieval jousting circuit, his new book reveals what it takes to ultimately make the transition into the world of TV and movies.

From the Shropshire Hills, to the Hollywood Hills . . . the frank, amusing and revealing autobiography is a rollercoaster ride with all the twists, turns and thrills you’d expect in a classic blockbuster.

“I’ve been fortunate to travel all over the world with my work, experience many different cultures and meet some incredible people,” says Justin, who was raised in Church Stretton, schooled in Ludlow, and now lives in Shrewsbury.

“After 20-plus years in this wonderful and sometimes wacky business, it’s fair to say I’ve experienced my fair share of highs, lows, and unpredictable twists.”

In the book, he talks about the time that A-lister Tom Hardy left him bloodied and dazed by smashing him in the face with a knuckleduster, and the day a prop misbehaved during an action scene with X-Men star Michael Fassbender, with painful consequences.

He also reveals what it’s been like working with other movie legends including Johnny Depp, Daniel Craig, Natalie Portman – and some of his adventures in and around Shropshire.

Justin recalls some of his many brushes with danger, whether driving fast cars, freefalling off rooftops, or setting himself on fire.

He says: “When people ask me about my job, I often get asked ‘Isn’t it really dangerous? Don’t you get scared?’

“Of course there are risks, but you should never underestimate the degree of planning, and health and safety awareness, on set.

“I’d like to think that, through my story and my experience, I can now impart some of the knowledge I’ve gained in the stunt industry over the past two decades to the next generation.

“If they have half the fun and adventures that I’ve enjoyed over the past couple of decades, I can guarantee them that they’re in for a fantastic ride. I’m looking forward to meeting films fans and sharing some of my stories.”

Tickets for the Oswestry Kinokulture event on January 20 are available from kinokulture.org.uk/ 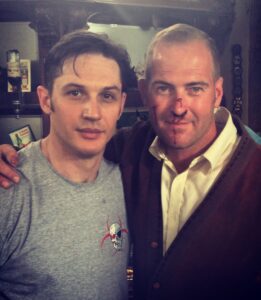 Pictured on the set of Legend with Tom Hardy. 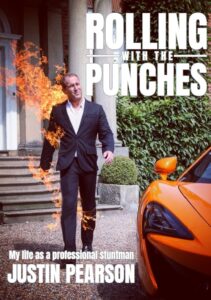 Rolling With The Punches (ISBN 9781910469088) is published by A Way With Media Limited, RRP £15. It can be ordered now at awaywithmedia.com/buy-books/Justin-Pearson