Borderland Rotary recently entertained the West Mercia Police & Crime Commissioner, John Campion and he was quick to explain that he is not in fact a policeman but the man with the money for policing in this area.

In a very interesting and highly entertaining talk he explained that he had been elected Commissioner in 2016 having previously served in the cabinet of the Worcestershire County Council.

He said his priorities were, care and support of survivors and victims, a secure West Mercia and a focus on the rebuilding of a visible police presence on the streets and thus reassure and build back any lost trust in the police.

John said, “We police by consent in this country, so the force must be trusted – and be seen – but we don’t leave any marks. A painter and decorator paints a wall so you can see where he’s been but with the police, when they leave a location, there is no sign of their recent presence so there may be more police about than we think.”

He also discussed online crime and the scourge of the “county-lines” drug problem and reported that a lot of effort and manpower was being used to stamp it out.

He concluded by talking about highway policing and said, “There are many deaths on the road and we each have to take responsibility for our own actions and so make the roads safer for everyone.” 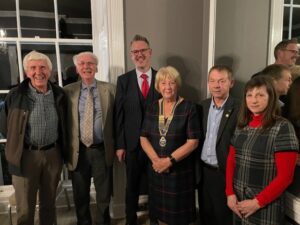