Borderland Rotary recently handed over the club presidency from Cathy Osselton to Chris Bryan-Smith at a meeting held  at the Sweeney Hall Hotel.

Cathy thanked the club members for all their support and help as the club, like the country, slowly emerged from the pandemic. She said, “I took over when the direction of Covid was far from clear and many of us wondered if we could ever get back on track, but we did and managed to successfully hold all our major events, Fireworks, Christmas Parade and Mountain Bike Challenge, for the first time in two years.”

Chris, has been a Rotarian for the past seven years and said he was grateful to Brian Ashton, the previous president, and Cathy Osselton, the outgoing president, for navigating the club through the last two stormy years and hoped that he would continue with their work in calmer conditions. He said, “Lots of Rotary Clubs have really struggled during the pandemic but Borderland is holding steady and I hope that our continued actions and activities will attract others to join us and help with our work in the community.”

Meanwhile, at another venue Paul Crosby, a long-time Borderland member and the man credited with introducing RYLA (Rotary Youth Leadership Award) to this country and running it for twenty years, was being awarded the Paul Harris Sapphire medal by the District Governor, Nick Gidney. The Paul Harris Fellowship medal is presented to Rotarians who have made an outstanding contribution to the community with the Paul Harris Sapphire going to those who have already received the PHF but continued to go above and beyond the call of duty.

The first pleasant task for the new president, Chris Bryan-Smith was to join Justin Soper (Borderland Rotary Environment) at Oswestry Guildhall to witness Oswestry Town Mayor, Cllr Jay Moore signing a pledge to support Operation Pollination which is a Rotary International project that highlights the need to increase bio-diversity across the globe to enhance pollinator habitats.

It is a fact that 25% of our food relies on natural pollinators, without them the world will be in serious eco-trouble. Currently, in the UK we have already lost 60% of our pollinators because of modern agricultural methods and within urban environments the struggle to find habitats is just as acute due to decked and paved private gardens and limited community green spaces. Cllr Jay Moore said, “Look out for lots more jolly wild flowers across the town – we must all do our little bit for the environment.” 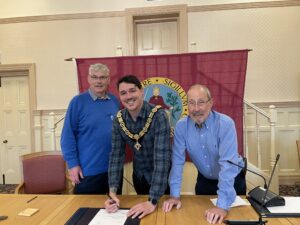