Call for Volunteers for Oswestry Branch

Previous Next
Call for Volunteers for Oswestry Branch

Neil Lawrenson, Acting Branch Chairman of the Royal British Legion in Oswestry, is appealing for volunteers to help take the branch forward and continue to provide support for serving and ex-military personnel and their families.

The British Legion was formed on 15 May 1921, bringing together four national organisations of ex-Servicemen that had established themselves after the First World War.  It was only awarded its “Royal” title on 29 May 1971, on its golden anniversary. The Royal British Legion (RBL) is at the heart of a national network that provides lifelong support to serving and ex-serving personnel and their families.

The Oswestry Branch dates back to the 1940’s and has been serving the local Armed Forces community ever since.  The Branch, with the kind support of the Oswestry Cricket Club, has now established its new home at the Club.

RBL provides lifelong support to serving and ex-serving personnel and their families.
The support starts after one day of service and continues through life and long after service is over. From providing expert advice and guidance, to recovery and rehabilitation, through to transitioning to civilian life.

Neil said, “The Oswestry Branch is a very aging branch and is only really surviving in name only.  I am trying to resurrect the Branch, but I can only achieve this with new willing volunteers.  With these volunteers, I intend to form a new committee and start to build up the Branch and hold various events as well as offering help and support to veterans and their families within our community.

“Whilst selling poppies last year at Morrisons, I was amazed at how many serving members of the Forces, veterans and their families live in Oswestry. I am hoping that some would like to get in touch and volunteer.”

Neil has a specific plan in mind to grow the branch into a stable support hub. He is looking for volunteers to help form a committee consisting of a Secretary, Treasurer, Standard Bearer and Escort Party, plus other volunteers to help with Membership, Events, Poppy Appeals, Community Support, website and entertainment.

Once again, Oswestry Branch is actively involved in the Poppy Appeal for the town, working alongside the RBL Poppy Appeal Coordinator for Shropshire; helping to distribute the poppies and collection boxes across the schools, shops and businesses in Oswestry and the surrounding areas, as well as setting up Poppy Appeal stalls in Morrisons and this year, Sainsburys.

Neil and volunteers will also be supporting the Town Council in organising this year’s Remembrance Parade on Sunday 13 November, as well as a short Armistice Day service. The event will involve Branch members, as well as any veterans wishing to join the Parade, forming up and marching from and to the Townhall and Memorial Gates. Everyone is welcome to come and watch the parade and service.

Neil explains why he is so passionate about the RBL and how they can help. “I served in the RAF for just under 29 years, I have served both in the UK and overseas, as well as active duty in Northern Ireland, Kosovo, Iraq, Afghanistan and the Middle East.  Unfortunately, due to injury, I was medically discharged from the RAF.  As part of my rehabilitation and subsequent discharge I attended the Defence Medical Rehabilitation Centre Headley Court and also the RBL Battle Back Centre, Lilleshall, Shropshire. Two establishments supported and funded by the RBL, which helped me both physically and mentally, in my rehabilitation and transition into civilian life.”

Oswestry Branch meets on the first Tuesday of every month, at 2pm, Oswestry Cricket Club.

For information about volunteering, contact Neil Lawrenson on 07832 427013 or email Oswestry.Chairman@RBL.Community 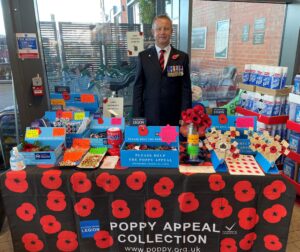