Members of Oswestry Borderland Rotary, recently enjoyed a talk by Rob Williams, Chairman of Cambrian Heritage Railways (CHR) discussing the opening of the line from Oswestry to Weston which is scheduled to run as a regular tourist service from next spring.

The work done by volunteers to open this section has been quite amazing with a new platform, siding and loop line being laid at Weston in the last couple of years – despite covid. Rob said “There are two main projects that will run in parallel, the first is to open the heritage railway just before Easter next year and run trains. The second is to work towards opening of a community rail scheme that will link Oswestry to Gobowen once more and provide a commuter service. This has been helped tremendously by the government giving us £50K to do the feasibility study of the plan” He continued, “Of course, the heritage line has the great advantage of having a destination in the form of Stonehouse Brewery and everyone smiles when I tell them.”

Borderland Rotary is teaming up with CHR not create a green corridor alongside the track with proposed bug hotels and rows of trees on the side of the line. Local schools are currently working on designs while Rotary members are busy getting sponsorship for trees to plant next autumn. 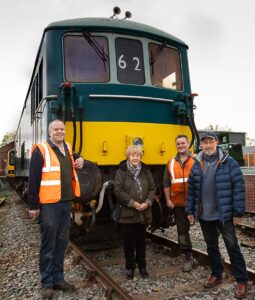