A brand-new exhibition van will be hitting Shropshire’s roads and towns as part of the fight to beat cancer – thanks to a generous £95,000 donation from a county business.

Lingen Davies Cancer Fund has purchased a fully-branded vehicle which will allow staff to further expand the charity’s LiveLife cancer awareness and prevention work. The new van was officially opened this week by The High Sheriff of Shropshire Selina Graham and The Mayor of Telford Councillor Raj Mehta at Telford Plaza – the parent company of which donated the funds.

The charity has been supporting and enhancing services for patients at the Royal Shrewsbury Hospital’s Lingen Davies Cancer Centre for more than 40 years. It is also now working on raising awareness about the signs and symptoms of cancer in communities throughout Shropshire, Telford, and Mid Wales. The LiveLife service now has three members of staff who attend large-scale community events, summer fairs, and corporate networking, sharing information about cancer and encouraging people to seek help from GPs with any concerns.

Naomi Atkin, CEO of Lingen Davies, said the LiveLife Service is a critical part of the charity’s work to assist with cancer prevention and improve early diagnosis rates across the region. Being able to purchase a van will allow the team to reach more people, helping support and advise them to seek early diagnosis where relevant.

“The Lingen Davies Centre sees over 4,000 newly diagnosed patients each year, and with current statistics stating one in two people will get cancer in their lifetime, the number of patients we see will only continue to rise.

“This very generous donation from Telford Plaza UK Ltd has enabled us to purchase a brand-new, multi-purpose, and fully-branded vehicle. We will be able to access more communities, more events, and more people across our large, predominantly rural, geographical patch.

“It will also boost our Cancer Champions work – being done as part of a national NHS England project to address health inequalities in the 20% most deprived areas of the country. We are working with health partners to recruit cancer champion volunteers in Telford and Shropshire to spread the message about the importance of attending health screening invitations. We know people who may not speak English as a first language, not understand the screening process, or be otherwise disengaged from local health services, are failing to take up cancer screening invites.

“This van will form part of the work to access those communities and make a difference throughout our region,” she added.
Mandy Thorn MBE DL, Chair of Trustees for Lingen Davies Cancer Fund, said: “The launch of this van is a huge achievement for the charity at a critically exciting time for us as we grow our service delivery, and celebrate reaching the £1,000,000 annual income mark for the first time in our 44-year history.

“Clearly it is also a great thing for our region as a whole – raising awareness about cancer, what people can do to help themselves live well, and what they should be on the lookout for, are vital methods to bring about more early diagnoses which bring about increased treatment options and outcomes,” she said.

For more details about the LiveLife Cancer Awareness Service, and to invite the team to your community event contact the LiveLife team on 01743 492396. 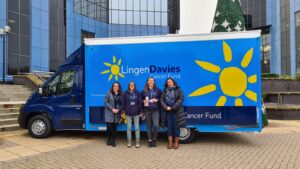