Cantiones returns to singing … but not in the rain!

Previous Next
Cantiones returns to singing … but not in the rain!

What a difference a border makes!

In common with all other choirs in the UK Cantiones has been meeting to sing only virtually since the beginning of the third lockdown.  The choir was very excitedly waiting for the relaxation of rules from 12th April fully expecting to be able to meet outside to rehearse face-to-face.  Sean Evans had very kindly offered Cantiones the walled garden at the beautiful Sweeney Hall Hotel as a venue for our first few rehearsals.  Sadly we were terribly disappointed to find that although other leisure activities in England from amateur group sports to fairly large events for the public (e.g. village fetes) were permitted, no choir, band or orchestra was allowed to meet except in socially permitted groups of six or two households – clearly not practical for a choir like Cantiones.

Undeterred (and desperate to sing!), the choir’s committee investigated the rules in the other UK countries and were delighted to discover the rules in Wales were different, allowing groups of up to 30 people to meet outdoors or smaller groups indoors.  Armed with this knowledge and thankful for being so near the Welsh border, more than 2/3 of the choir returned to Black Park Chapel in Halton to rehearse during the evening of Tuesday 4th May, the first time since September 2020.  Whilst the weather prevented everyone singing at the same time outside, splitting into two small groups, distancing appropriately and wearing face masks allowed two rehearsals to go ahead inside.  There was great excitement from members singing together again with one saying, “It felt fantastic to be singing with other people again, to hear them and to make music with them.  I’m feeling on top of the world”.

Cantiones’ Musical Director, Martin Bussey, who has been producing rehearsal videos for the choir on YouTube as well as leading whole-choir rehearsals on zoom for nearly a year said, “It was great to be able to rehearse in person again. We’ve been working hard in zoom rehearsals but were excited to be able to rehearse together in a focused way once again, preparing to perform”.

Making Music, which is the UK’s membership organisation for leisure-time music, with over 3,700 groups representing around 200,000 music makers across the UK, has carried out a survey of members which indicates that there are difficult times ahead for amateur music groups.  Only 28% of groups are planning public in-person events between May and August 2021 and, despite the UK’s highly successful vaccination programme, an astonishing 67% of groups cite their own members’ anxieties as the top barrier to a return to in-person activity.

However notwithstanding those statistics, the majority of Cantiones’ members are happy to meet both to rehearse and to perform.  The choir plans to take part in International Music Day on Monday 21st June in Cae Glas Park.  Please join us if you can to celebrate the Midsummer solstice with thousands of others across the globe.  During the afternoon of Saturday 3rd July the choir also hopes to present a concert in Holy Trinity Church.  More details will be provided closer to both dates.

Cantiones would like to extend its very grateful thanks to Sean Evans for his original offer to host our rehearsals at the Sweeney Hall Hotel and to Dr Bridget Drukker at the Black Park Chapel Trust for the hosting offer we were able to take up. 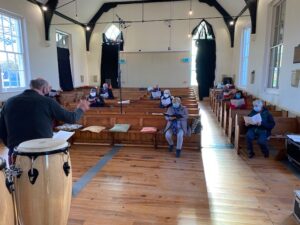