Cast your vote for your Patient Choice Award winners

Previous Next
Cast your vote for your Patient Choice Award winners

Four individuals and four teams at The Robert Jones and Agnes Hunt Orthopaedic Hospital have been named finalists in the Patient Choice Awards – and it’s up to you to decide who takes home the special titles.

Past and present patients were asked to nominate a member of staff or a team who went above and beyond in our Patient Choice Awards.

The winners – who will be selected by a public vote online – will receive the award in November.

Nominations were submitted for outstanding people across the Oswestry-based hospital in the Patient Choice Award (Individual), and a shortlisting panel met to decide the final four who are being put to public vote.

The final four are:

Alice said: “Rob has literally changed my life. A year ago, I dislocated my knee at home, and I didn’t seek any medical attention. One of the repercussions of this was not only was I in agony daily, but I had muscle spasms and lost a lot of mobility in my left leg.

“When I met with Rob, he knew it would be a challenge. One week of hard work later and Rob gave me back my freedom. He is my hero and deserves this award and so much more.”

Keith was nominated by Rose Prosser. She said: “I spent three days on Oswald Ward after having surgery on both my legs.

“Being on your own in hospital after major surgery with no visitors is daunting. Keith was warm, welcoming, attentive, caring, a great listener and natural at his role. Nothing was ever too much trouble and I hope he is recognised for being such a great ambassador for the NHS.”

Yvonne Alcock, who nominated Mr Richard Potter, said: “I had a shoulder operation back in December 2019, and unfortunately, I experienced some problems after. After one phone call to his secretary, he contacted me immediately to see me to undertake tests and treatment, even though he had other commitments.

“He is a remarkable consultant who is an asset to the hospital. He shown me such care and compassion when I was in so much pain and suffering.”

Ellie was nominated by Gordon Allen who praised her for going above and beyond to help when his daughter, Charlotte, damaged her spine in a car accident.

He said: “After her accident some years ago, Charlotte’s situation progressively worsened. Many years ago, I was a patient at RJAH and as a long shot, I rang the Spinal Disorders Unit, and the call was taken by Ellie. She quickly realised how upset I was and took it upon herself to find Charlotte’s records, speak to one of the spinal surgeons, and arrange an appointment.

“The impact of Ellie’s reaction and behaviour has made an immeasurable difference to Charlotte. She cared enough to make a difference.”

More nominations came in for teams across RJAH in the Patient Choice Award (Team) category. The final four are:

Teresa said: “My son has been on Alice Ward several times for surgery over the last eight years and each time we are on the ward, we are treated as a member of the family. Where else do you get a cup of tea when you arrive first thing in the morning to visit your son?

“They staff are attentive, accommodating and make each stay as stress free as possible, in short, they are simply amazing and deserve this award.”

Carwyn and Mr Pete Gallacher were nominated by Laura Davies for the care they provided when her knee locked and was unable to stand or drive.

She said: “Carwyn arranged for my MRI scan to be done the same day and after my MRI scan, he then planned for Mr Gallacher to see me urgently. Mr Gallacher stayed late that evening to squeeze me in at the end of his clinic and then added me to his operating list the following day. Within 24 hours, I was ‘unlocked’ and on the road to recovery.

I cannot thank them both enough for their professionalism, kindness and for going the extra mile when I was in pain. They came to my rescue, and they are a total credit to RJAH and the NHS.”

Ludlow Ward received a nomination from Grace Lenton. She said: “I was admitted to RJAH in a lot of pain back in September 2020. The whole team on Ludlow Ward looked after me so well, every time a member of staff walked past my room, they came in to see if I was okay and if I needed anything.

“I am someone who’s not keen on hospital at the best of times, but I cannot thank the team enough.”

Stephen said: “I was diagnosed with a chondrosarcoma in 2019 which came as a huge shock and has been life-changing.

“Montgomery Unit have been there for me every step of my diagnosis and treatment. I could pick up the phone at any time to speak and get advice from the team which has given me so much comfort. After surgery I was admitted to Oswald Ward, and after reacting badly after my operation, the team were a beacon of light in a dark time.

“I have been back to both units as both an inpatient and outpatient for physiotherapy and check-ups. The teams work together to provide truly holistic care which has been amazing throughout.

“I am grateful and humbled to every single member of the team that I have been fortunate to be cared and supported by.”

The full nominations and the online vote can be found at www.rjah.nhs.uk/vote.Voting closes at 9am on Friday 8 October. 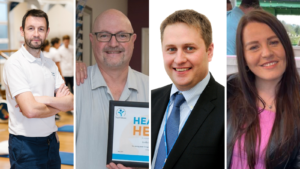 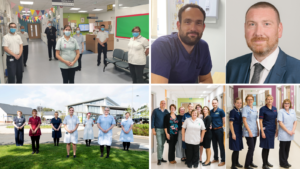