Cheers to the Return of Shropshire Oktoberfest

Previous Next
Cheers to the Return of Shropshire Oktoberfest

Shropshire Festivals’ sell out drinks’ festival is set to return to its huge marquees in the Quarry this autumn on Friday, September 30 and Saturday, October 1.

Last year the festival sold out ahead of the event, and the organisers have reported that early bird tickets have already sold out to this year’s festival. Many people have been opting for a luxury festival experience in the Chrisbeon VIP area.

The festival site will be filled with independent brewers, distillers, and local drinks producers, serving up the best locally made ale, lager, cider, perry, wine, gin, rum, fizz and cocktails.

Friday’s acts also include The Follicles, The Vertigo Band and Lost The Plot. The Saturday music line-up will deliver sets from Microbaby, Groove Dynamite, Something 4 The Weekend, Dirty Rockin Scoundrels, Five O’clock Hero, and Ego Friendly. The stage will be hosted by BBC Radio Shropshire’s Paul Shuttleworth.

On Saturday there will be barrels of laughs to go with the beers in the Comedy Club. So far, confirmed comedians include Britain’s Got Talent finalist – Micky P Kerr, English Comedian of the Year 2016 – Josh Pugh, master of mixing punchlines with unpredictable audience interaction – Liam Pickford, the highly regarded international act – Gordon Southern, and the compere for the night will be North Devon stand up – Luke Honnoraty – with his stories on life and embarrassing moments.

Festival goers can pick their own music in the silent disco tent, sponsored by Throgmorton Associates Wealth Management, and have 5 minutes of fame in Volvo Shrewsbury’s Carpool Karaoke tipi.

Shropshire Festivals’ Director of Fun, Beth Heath, said, “Momentum is building for Shropshire Oktoberfest 2022! From beer buffs to gin aficionados, local event lovers to party people – you will find the best night out at our annual event.

“There will be loads of lederhosen, Oompah, real ales and our big beer hall, plus there will be all the ingredients for a brilliant day and evening out, with bands performing singalong favourites, our popular silent disco tent, carpool karaoke, delicious street food, and anyone who’s anyone will be there!

“We are big advocates of independent, local businesses, so there won’t be any mainstream beer at Shropshire Oktoberfest, just the region’s best independent brewers.”

Oktoberfest in Germany traditionally is held mid-late September, ending on the first Sunday of October. Oktoberfest is an important part of Bavarian culture, having been held since 1810.

Beth adds, “If you haven’t been before you’ll be pleasantly surprised at how big the event is – there isn’t just one bar and a couple of beer options – we have huge marquees, stretching across the bottom of the Quarry, filled with local brewers serving hundreds of real ales, ciders, and lagers straight to our festival goers, plus our gin, wine, and cocktail bars.

“Our Hopportunity Bar from CAMRA (Campaign for Real Ale) is always a big hit, selling their top picks and unusual choices, usually including vegan and gluten free options, which you just don’t get on tap normally. CAMRA will crown the best beer at the festival ‘Shropshire’s Choice’.

“Don’t miss the county’s best party – we’ll see you there!”

Tickets can be purchased from www.shropshireoktoberfest.co.uk. 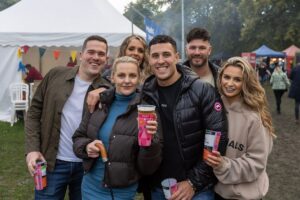 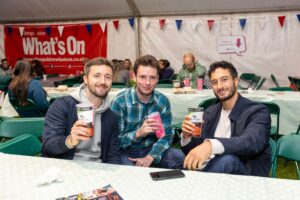 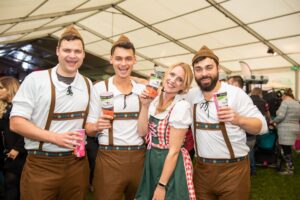