Prior to Council yesterday evening the Mayor of Oswestry, Councillor Jay Moore, welcomed Kelly and Gary Clarke to the Guildhall to receive the second Mayor’s Community Champion Award. The award is an opportunity for the Council to show its appreciation and recognition to a member of the community (Or this case, members) for their outstanding contribution to the betterment of our town and its residents.

In presenting the award the Mayor said “For those that haven’t come across Kelly and Gary, they are both residents of Oswestry, and have devoted an extraordinary amount of time and effort into raising money for local charities. Primarily for the Movement Centre and Hope House as well as several others.

In 2014 Kelly started running, with a goal of improving her personal fitness. She quickly set her sights on The London Marathon and put in a ballot to run, which unfortunately was unsuccessful. It just so happened, that following a chance conversation with Olympian Andy Clark, where he informed Kelly that The Orthopaedic Hospital had charity places available, but she would need to raise £3,000. Quite the undertaking. But if successful, the funds raised would benefit the Bone Cancer Centre at our world-famous Robert Jones & Agnes Hunt hospital.

Amazingly, Kelly would go on to raise £7,000 and successfully complete The London Marathon. Following that success, both Kelly and Gary started choosing annual charities, and setting new challenges for themselves. In 2016 Kelly ran a half Marathon, by 2018 she had officially become a volunteer fundraiser for The Movement Centre. In July of 2020 Gary had planned to cycle from Lands End to John O Groats, however, when the pandemic struck, Scotland was closed. Undeterred he cycled to Marshall Meadows Bay instead, raising another £3000 in the process.

Both continued to fundraise throughout the pandemic. Selling scratch cards running virtual events. Anything they could to continue to raise much needed funds. They started 2021 by competing in the Peddle Pushers event hosted by Adrenaline Sports. They completed the virtual London Marathon, completed The 26.2 challenge, a 10 mile hike for Hope House and more, again raising close to another £3000. This year Kelly completed a Sunrise to Sunset walk, Gary a marathon for McMillan and he also finally made it to John O Groats when he cycled from Lands End in just 130 Hours.

Somehow around all that, they have still found the time to host quiz nights, bingo nights and live music events to raise money for the causes close to their hearts.”

In handing over their certificate the Mayor added “Runners, walkers, cyclists, cart wheelers, fundraisers. And now, Champions Of Oswestry. Gary and Kelly Clarke” 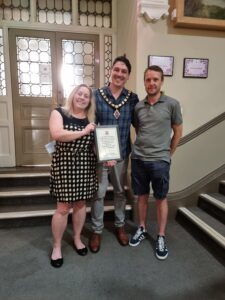 The Mayor of Oswestry, Councillor Jay Moore pictured with Kelly and Gary Clarke.