Qube – Oswestry Community Action and Pete’s Taxis were two of the organisations involved in an exciting Time Team dig over the weekend of the 10th to 12th September near Whittington.  Qube’s Dial a Ride, together with Pete’s minibus, provided community transport to and from the site at Halston Hall.

The dig, led by Professor Stewart Ainsworth, Visiting Professor of Landscape Archaeology at the University of Chester and long-standing Time Team expert, was designed to investigate local links to a newly identified medieval site in the area. Over 20 volunteer archaeologists, students studying History A level keen to pursue a career in archaeology were involved, pupils from Whittington Primary School were involved in three days of digging a series of test pits to help understand the site.

Davina Fairweather project coordinator for Whittington Castle said: ‘This was an amazing experience for everyone involved.  Working with professional archaeologists is something most people only ever dream of; on this occasion we could make it reality.  It was especially gratifying that some of our volunteers contributed to the range of finds discovered at the site.  It was also very exciting to meet so many Time Team favourites.  Everyone gave so much of their time.’

Charlotte Brownhill, History teacher at Moreton Hall School joined some of their pupils on site: ‘Having been a fan of Time Team since it began and having had a few opportunities to be involved in archaeology over the years, working as a volunteer on the dig was a fabulous experience. I have learnt so much from the other volunteers as well as the experts and it has reignited my passion for archaeological work. As an A level History teacher, being able to introduce my students to archaeology has been invaluable – many of them have considered studying archaeology at university but have not had the opportunity to ‘try it out.’ Being involved in this dig has given them the confidence to know that they would like to apply to study archaeology at university. With many thanks to all the team for making this happen!

The Time Team episode featuring discoveries at Halston Hall will be shown on YouTube in Spring 2023.

There are plans to develop archaeology further in the area, based at Whittington Castle. A proposal for funding will be submitted to the Heritage Lottery Fund in due course. 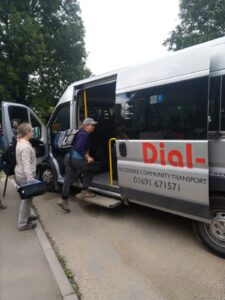 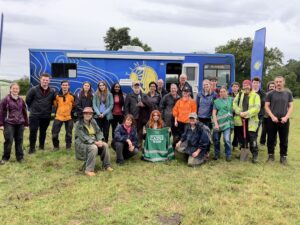 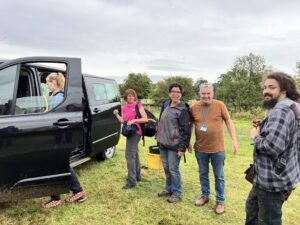 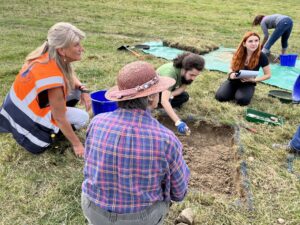 Pictured: Professor Carenza Lewis FSA FHEA FRSA – Time Team and Professor for the Public Understanding of Research in the College of Arts, University of Lincoln, discussing the test pit with local volunteers. 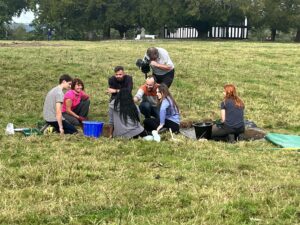