Continuity and a new member at Borderland Rotary Club

Previous Next
Continuity and a new member at Borderland Rotary Club

Borderland Rotary welcomes a new member whilst saying farewell to his father-in -law.

It was a very moving evening at Borderland Rotary as they welcomed Harry Williamson (Sometimes know as Ian) to the club and accepted the resignation of his father-in-law Ronan O’Brien who has been an active Rotarian for the past fifty-six years, firstly in Bromley, Kent and for the last 30 years at Borderland.

Ronan, now ninety-six, made a short speech thanking everyone for their fellowship through the years and said, “I have loved my many years in Rotary but as I leave, I am so very pleased to hand on the baton to my son-in-law Harry, who I’m sure will give and receive the great gifts of service in the community and friendship in the club. Good luck to you all.”

Ronan still holds the record for the oldest person to have abseiled from the Oswestry Fire Station tower, when he was a mere eighty-four, at a Borderland charity event.

After a short induction ceremony Harry said, “As a very busy vet, I resisted joining Rotary even though I was often cajoled by Ronan but, now that I’ve spent a little time in the club, I think I’m going to enjoy it, I feel at home here already and I must thank Ronan for introducing me and I only hope I can live up to his great example.”

If you’d like to get involved in Rotary, please go to www.borderlandrotary.org.uk 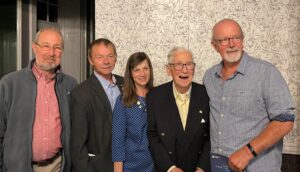