Previous Next
Crufts Chairman to Judge at Oswestry Venue

On Sunday 11th July, the top winning German Wirehaired Pointers will be attending the British Ironwork Centre to compete in their breed only open show for the title of Best in Show.

This Kennel Club licensed event will be the first time, the dogs and their owners, have come together since the pandemic in 2020 and will be the first dog show ever held at the Centre.  Judge Mr Tom Mather, Crufts Chairman, will be judging each of the dogs based on their closeness to the breed standard, a list of requirements written for each breed based on appearance, movement, and temperament.

As a dog friendly site, Chairman of the British Ironwork Centre, Clive Knowles stated ‘We are very honoured and pleased to be hosting this prestigious event. The show will host the best of the very best in the breed and we welcome any other breed clubs and dog organisations to contact us if they want to host their events here’.  Marketing Manager and GWP Secretary Alice Turnbull stated ‘I am very pleased to combine both my work and my hobby at one event. The committee of the GWP Club want to thank the British Ironwork Centre for their generosity to host the event and donating two bespoke trophies for the day. To us, as a club, this is our equivalent of the world-famous Best in Show at Crufts, and to have the Judge be the Crufts Chairman, means so much. We welcome any visitors on the day to come and watch the show and ask questions about how to get into showing’.

The German Wirehaired Pointer (GWP) is a medium sized hunting, pointing, and retrieving dog, which was originally bred in Germany and has a thick wired coat, hence the name. The breed club will be celebrating their 45th anniversary later in the year.

To find out more about how to host a dog event at the British Ironwork Centre email info@britishironworkcentre.co.uk 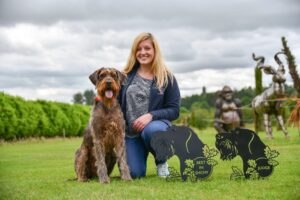