Dairi-Pak (the Ruyton based cardboard box makers) has sponsored the Bike Challenge every year since its first running but this year, as new sponsors are welcomed, the name has changed to the Borderland Mountain Bike Challenge.

Dairi-Pak has been making cardboard boxes in Ruyton XI Towns since 1989 and employees around 50 local people. It was started by the late Brian Gray who returned to Shropshire in the mid-80s having pursued a career with Express Dairy at their head office in South Ruislip. Mr Gray had previously managed the Dairy at Ruyton in the late 60s and early 70s. With Mr Gray’s career experience and contacts, it’s no surprise that Dairi-Pak supply corrugated cardboard boxes to food, drink and dairy companies (hence the company name) but also supply industry and general manufacturing with corrugated packaging.

Tim Gray, Owner and Managing Director of Dairi-Pak explains the company’s involvement with the Borderland Mountain Bike Challenge … “My late father, Brian Gray was a lifelong cycling enthusiast and was keen for the Borderland Rotary Club to host this charity event. To help pay for the costs of organising and running the Mountain Bike Challenge he suggested that Dairi-Pak become the event sponsor.” He continues “These events take a lot of organisation and there are certain costs that can’t be avoided, such as insurance, the St John’s Ambulance to be in attendance and the food and drink for cyclists to enjoy on completion of the Challenge… Sponsorship means these fixed costs can be covered so every penny raised in sponsorship goes to the Air Ambulance and chosen local charities.”

This is Borderland Rotary Club’s flagship event each year and they have raised hundreds of thousands of pounds in the 27 years of running the Mountain Bike Challenge. Rotary members not only organise the Event, you will see an army of Hi Vis clad Rotarians helping out on the day. Most importantly they man the marshal posts and drink/snack stations around the 22-mile route. This ensure riders are hydrated, energised, and importantly don’t need to get off their bike to open and shut gates.

Tim Gray explains how the Mountain Bike Challenge will be bigger and better this year … “Lockdown afforded me some time to think about things other than business and family – so I got to thinking how we could develop the event. The route is fantastic and didn’t need changing, but with increased support and sponsorship the event could be ‘up-scaled’ and promoted to attract more riders and hence raise more money for charity. Dairi-Pak have been sole sponsors of the event for the past 28 years so inviting other community minded companies to become joint sponsors seemed like a good idea. Not only increasing funds available to host the event but to tap into the new sponsors’ enthusiasm and expertise. We are delighted to have Aico and Mule Cycles alongside Dairi-Pak as sponsors of the renamed and rebranded Borderland Mountain Bike Challenge.”

Along with the new name, the event has a new logo and website as it re-establishes itself on the MTB Calendar for many years to come.

Anyone wishing to ride the Borderland Mountain Bike Challenge on May 7th should visiting the website and register  https://borderland-mtb-challenge.org 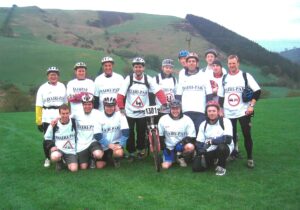 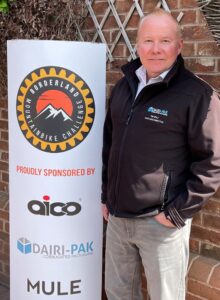