Previous Next
Dyslexia stars pick up awards at glittering event

Inspirational dyslexics, supportive employers and educators were celebrated at a special awards night in Shropshire.

Amongst the winners of the UK Dyslexia Awards were Clive Knowles, founder of the British Ironwork Centre in Oswestry who scooped Entrepreneur Award; Samantha Jones from Lawley, Telford, who won the Special Educational Needs (SENCO) Award and Morgan Jones from Shrewsbury who won the Community Shining Star Award in the 13-19 year-old category.

Retired specialist teacher and lecturer Liz Norton, who founded the Telford Dyslexia Workshop in the 1990s, also received a special Founder’s Award for her services, vision, drive and determination to empower and champion dyslexics across Shropshire.

Winners from as far afield as Scotland, Worcestershire, Shropshire and Northumbria also picked up awards at the celebration evening on September 24.

The ceremony was held at the Enginuity interactive museum in Coalbrookdale with about 100 guests present, and many more watching on live streams from around the country.

Teenage winner Morgan, who has just started a degree in Zoology at the University of Hull, was praised by judges for her ‘dedication to the community’ from helping older people during the Covid pandemic to supporting local Cubs and Scouts groups, fundraising and being a role model for her school.

Commenting at the awards Morgan, who found learning at school difficult because of her dyslexia, said: “I’m so excited to have won this award. It’s a bit surreal and means a lot as there are a lot of wonderful people here that also deserve this award.”

Winner Samantha, who is a SEND and Inclusivity Manager at City of Wolverhampton College and works with learners aged 16 plus, said she was privileged to have been able to support so many individuals through her work.

She said: “Doing what I do has always been about making sure people understand that we are who we are and then empowering them to develop the confidence to achieve their goals and ambitions.”

Clive Knowles was unable to attend the event but was described as a ‘true entrepreneur’ by the judges for his vision and work to create such an impressive worldwide tourist attraction.

Awards founder Elizabeth Wilkinson MBE, from Wellington, said the celebration event was a huge success. She said: “For the first time this year, all nine awards were open to nominations from right across the UK, and the judges were overjoyed with the quality of entries in all sections.

“It is fabulous to hear so many stories of dyslexic people putting their stamp on the world, as well as the heart-warming stories of the tutors, teachers and support staff who empower and encourage success.

“The awards are a success story that was truly made in Shropshire, and I was delighted to see so many nominations and winners from the county.”

The Dyslexia Awards continue to shine a light on the vast array of dyslexic skills, strengths and talents of individuals as well as recognise the role of supportive employers and educators who value and encourage those strengths.

Awards were presented in nine categories and the winners were:

Eli, who is dyslexic herself, has run The Dyslexic Dyslexia Consultant business since 2007 and has worked in the field of dyslexia for 22 years. She was awarded an MBE for her services to dyslexia in this year’s Queen’s Birthday Honours List.

She is committed to showcasing the commitment and inspiration of educators, marking the achievements of dyslexic individuals and celebrating diversity in the workplace to bring about positive changes in society.

For more information about the Dyslexia Awards visit https://theddc.org.uk/dyslexiaawards/ 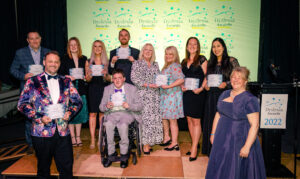