Ellesmere celebrates May Day in style

Previous Next
Ellesmere celebrates May Day in style

Ellesmere’s popular Cremorne Gardens was invaded over the Bank Holiday weekend by over fifty sprites and a towering goddess to celebrate the arrival of spring.

The magical scene called The Sprites of Spring was created by Fizzgigs, Ellesmere’s Community Arts Group. The central twelve-foot figure was based on a famous painting of the goddess of spring and was clothed in purple and green robes with a flowing headdress. The sprites were made by members of the arts group and the local community.

“The restrictions mean that we can’t organise our usual events at the moment but we wanted to do something to celebrate May Day,” said Fizzgigs chairman Ian Andrew.

“The figure of Primavera is based on the angel that was outside St Mary’s Church at Christmas. We wanted to surround her with a gathering of fun-loving sprites, some of them dancing around a maypole, others playing musical instruments and some just getting up to mischief,” he added.

The installation was formally declared open at 2pm on Saturday when Fizzgigs’ Artistic Director, Tony Lewery, welcomed the first visitors and two young people were presented with prizes for winning a competition to name two of the sprites.

Joshua Humphreys, aged six from Tetchill, won the prize in the 4-7 age group with the name Jebbadiah. ‘I knew the name of the lady who is famous for doing something special. Eglamine (sic) Jebb. So I added on to her name,’ he explained. He also revealed that Jebbadiah likes to fly over the Mere at night!

Mary Lewery, who came up with the idea for the sprites, declared, ‘How appropriate that he should choose that name, especially as the installation at the Bandstand is so close to the artworks installed last year to celebrate the founding of Save the Children Fund by Ellesmere sisters Eglantyne Jebb and Dorothy Buxton.’

Evie-Rose Rodenhurst, aged eight and from Oswestry, won the prize in the 8-10 age group with the name Rosie Rainbow. She said, ‘the stripes in her dress are like some of the colours of the rainbow. And I like the alliteration.’ Rosie Rainbow is playing a clarinet and and Evie-Rose was delighted to learn that its maker – Anna Hayes – would be playing her own clarinet for real after the prize giving.

Visitors to Cremorne Gardens had come from all over Shropshire, including Shrewsbury and Telford.  Evan White from Wem said, ‘I wish we had something like this. It’s a credit to the town.’

The installation was in place from 2-5p.m. Saturday, from 10a.m-5p.m. Sunday and 10am-1pm Monday with live music from 2pm on the first two days. 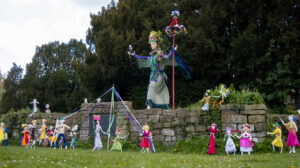 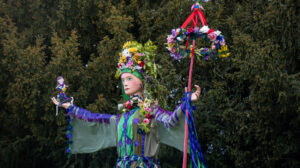 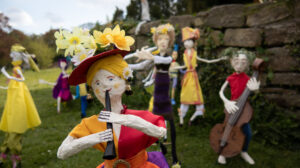 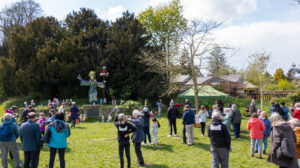