A local school has gone above and beyond to answer a call from the Queen to create a legacy to mark her Platinum Jubilee.

Queen Elizabeth II asked for people to plant a tree to create a canopy around the country for her Jubilee on June 3 – but Ellesmere College has instead planted 70 trees.

Mike McCarthy, Director of Operations at the school, said: “This has been a great project for the school.

“Ever since I have been here we have had an ongoing project to plant new species so this national scheme for the Queen’s Jubilee was a brilliant occasion to be part of and make the most of the site.

“There has been educational value to it, environmental benefits, sustainability for future generations to enjoy and of course CO2 benefits of having more trees on site.

“We tried to put the species where they will be suitable and stand out, creating a welcoming atmosphere to the College and have maximum impact.

“We are so pleased with the outcome, it is great to have them on our site and it has caused quite a buzz, we have had some really positive comments.

“We have got more room so we won’t stop here.”

The scheme was coordinated by Head of Grounds Ian Morris and involved some students who helped plant them too.

Lewis Reardon, a year 12 pupil at Ellesmere College, planted a tree as part of his Extended Project Qualification, an A Level additional project.

His evergreen Oak stands between Lower School and the Tennis Academy Centre. 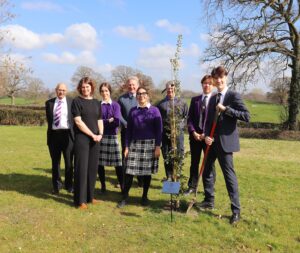