In what is becoming an annual Ellesmere tradition, preparations are being made for families to engage in seasonal silliness on Sunday, the 6th November. Young and old alike are invited to bring their Halloween jack o’lanterns for a ‘Final Fling’ to the Birch Road recreational field from 2pm to 4pm.

The free event is being brought to the town by Fizzgigs, the local community arts group. The pumpkins will be flung via a trebuchet, a medieval siege engine. This was the brainchild of Fizzgigs member, Peter Cartlidge.

‘It was originally used for an outdoor theatrical show we put on, but it seemed a shame not to use it for something else,’ Peter explained.  ‘About five hundred kilos of ballast will be in the trebuchet bucket which will be pulled into position for every pumpkin fling.’

‘Operating the trebuchet is hard work,’ Peter added. ‘So come early to be sure your pumpkin gets thrown.’

Last year, over 150 people attended the event. Fifty-two pumpkins of all weights and sizes were flung in the afternoon.

Mirjana Garland, Chair of Fizzgigs explained, ‘It is a serious matter as well as fun. Visitors are encouraged to name their pumpkins and each throw will be recorded.  The record, set last year, is currently with a pumpkin called Derek which achieved an impressive 85 metres.’

All pumpkin flesh and unflung jack-o-lanterns will be collected from the field and taken for composting. 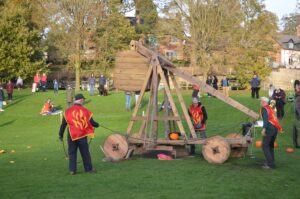 Preparing the trebuchet to fire