Crowds braved the threat of storms in Ellesmere on Friday evening for the town’s Winter Festival when Father Christmas came to town accompanied by a lantern procession organised by Fizzgigs, the town’s community arts group.

Father Christmas arrived at the Wharf by canal boat, courtesy of ABC Boats with around 200 people waiting to greet him. He was escorted by lantern-bearing attendants to a spectacular sleigh, laden with glowing presents. The sleigh was the creation of Tony Boys.

The sleigh was then drawn through the streets by swans trailing ropes of lights. The gracefully flapping swans had been designed and made by Peter Cartlidge.

Spectator, six-year-old Jaimee Bellingham said: “It was the best part of the parade.”

The sleigh was part of a procession which included an enormous robin created by Mirjana Garland, a flaming Christmas pudding made by Bob Richards and a giant Christmas cracker by Claire Cartlidge amongst other amazing creations.

Just before the procession set off to parade through the town, Wharf Road was clogged with excited townsfolk and visitors.

Steve Barrett, who had come from Oswestry to see the parade said the procession was incredible. “What an achievement for such a small town,” he said.

After the large lanterns came the Brownies bearing snowflakes and stars, then the community lanterns. Becky Newson had made a present lantern at a workshop held the previous weekend and was proud to be part of the procession. ‘Making this lantern is one of the best things I’ve ever done in my life. I’ll definitely be making another one next year,’ she explained. Her mother said, ‘All the hard work that goes into this is utterly fantastic.’

Mirjana Garland, this year’s coordinator of the procession said: “It was organised chaos, but great fun. We’re so grateful the wind and rain held off for a wonderful event. We would like to wish everyone a very merry Christmas.”

Details of all Fizzgigs activities and pictures of past events can be found at www.fizzgigs.co.uk 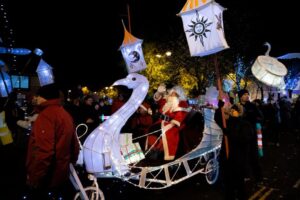 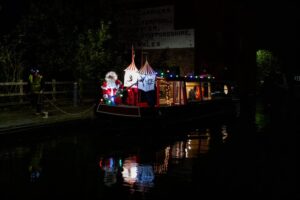 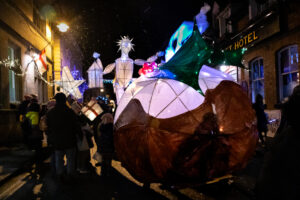