Youngsters aged between seven and eleven were inspired to get creative during the school holidays by a magical display in Ellesmere. Five of them have been rewarded with prizes for their entries to a special competition.

A magical trail was created by Fizzgigs, Ellesmere’s Community Arts Group, in the Plantation Wood in Ellesmere. It featured twelve enormous imaginary creatures. These ranged from a caterpillar lurking in the undergrowth to a proud hawk with outstretched wings ready to take off from high up in a tree. As well as these out-sized creations there was a parliament of more than twenty small owls made by members of the community.

The trail was enjoyed by hundreds of people during the summer holidays. ‘We were blown away by the response,’ says Ian Andrew, Chairman. ‘We produced a leaflet to guide visitors around the trail which was available in town and from a box at the Plantation. We had to refill the box every other day – more than 750 leaflets were printed and used’.

Young visitors to the trail could take part in a competition by writing a story or poem, drawing a picture or taking a photograph of ‘My favourite creature’. Once the trail and the competition closed early in September a team of judges had the difficult job of choosing the winning entries.

Organiser Claire Cartlidge says, ‘It’s been lovely to receive such excellent entries. What fantastic imaginations the children have!’ Claire added that entries came from Malpas, St Martins, Colwyn Bay as well as from Ellesmere. ‘It was hard to choose which ones to reward with prizes.’

‘We are so lucky to have had donations of fantastic prizes from some of our local businesses,’ says Claire.  ‘Moolah, Canvas and Clay and More than a Sundae in Ellesmere, and Booka, Oswestry’s wonderful independent bookshop.’

Jonah Durham (who attends Criftins School) wrote a story about Owlbert Einstein. He said, ‘I was the first in my family to find the teacher and the owls. It was really exciting. I asked my cousins to come see them and I visited them lots. I enjoyed seeing them in the forest and imagining the creatures stories. The owls were my favourite.’ He added, ‘I hope to see more magic there. Next time, please do more animals, like a sloth, please.’

For more information about this fabulous Fizzgigs’ project and upcoming events, go to www.fizzgigs.co.uk 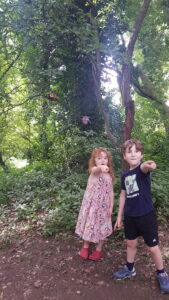 Pictured: Jonah with sister Tilly (aged 5) looking at the owls.