Ellesmere Rotary has recently made two donations that demonstrate the extraordinary generosity of the people of Ellesmere.

Rotary spokesperson Graham Hutchinson said, “Over the first weekend in March, Rotarians carried out a bucket collection at the local Tesco’s store in aid of the casualties resulting from the Russian invasion of the Ukraine.

“With contributions coming in from other sources such as Probus, very quickly Rotary was able to send a cheque for £3,600 to the International Rotary Fellowship of Health Care Professionals.

“Money is still coming in and this will also be transferred quickly to where it is needed. The IRFHCP is co-ordinating the response to the crisis in the Ukraine and the money has already been used to supply Ukrainian medics and volunteer doctors and nurses who have travelled to the vicinity with the means to treat the victims of war.

“Medical equipment and consumables such as transfusion fluids, antibiotics and other emergency drugs have been purchased and supplied, along with thousands of tourniquets. An early request for a mobile Xray machine for the rapid location of shrapnel was being responded to as the Ellesmere money was on its way. Derek Clifford of Ellesmere Rotary said, “Once again the people of Ellesmere have shown the deep sympathy that they feel for the innocent victims of tragedies such as the situation in the Ukraine”.

“On the 19th March Ellesmere Rotary was pleased to host the Shrewsbury Concert Band at the Comrades Club in the town. The Band was performing for the first time since Covid struck and entertained the audience with a wide variety of band music that was enthusiastically received. The evening raised £600, which has been donated to Hope House.”

Ellesmere Rotary’s Derek Clifford also announced, “The Ellesmere Rotary Regatta will be held on the first Sunday in July, it will raise funds for The Movement Centre at Gobowen and for The Lyneal Trust.

“These Charities were to have received the proceeds from the 2020 Regatta, which, like the 2021 event, was a victim of Covid.” 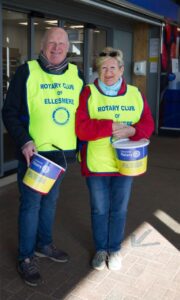 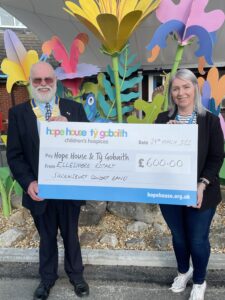