Mike visited the specialist further education college, near Oswestry, to deliver a generous cheque which had been raised during one the SJFL’s Charity Cup Festival of Finals. He was impressed with the customer ‘Marketplace’, which includes a Garden Centre and Shop, Vintage Advantage charity shop, Walled Garden Café, Orangery Restaurant and Food Centre.

Mike presented a cheque for £452 to Derwen College fundraiser Anna Evans, and Retail students Mary Tait and Varvara Barbieri, who work in the Garden Centre Shop. Shropshire Junior Football League raised the money on entrance and programme fees at the finals held at Market Drayton Town FC Greenfields Stadium on 15 May 2022 – read more at https://shropshirejuniorleague.co.uk/charity-cup-festival-sponsoring-charities-2022/

The SJFL also raised money at two other Charity Cup Festival of Finals for Shropshire charities, the Harry Johnson Trust and Empathy for Special Children

On finals day, the Derwen College donation was accepted on behalf of the College by special guest Sue Healey. Sue also presented SJFL with the inaugural Bill Healey Memorial Cup in memory of her husband Bill. The cup has been donated to the league by his family and is in recognition of Bill’s commitment and support of junior grassroots football.

Mike said: “It was great to visit Derwen College to see for myself how important the funds are in supporting students with special educational needs and disabilities to reach their potential in work and independence, as well as sports and fitness.”

Fundraiser Anna Evans said: “Thank you so much to SJFL for choosing Derwen College as one of its charities to support for 2021/22. We are very grateful to them and to all the players and spectators on the day who helped to raise these valuable funds.”

Find out more about Derwen College Charity, and the College’s customer ‘Marketplace’ at www.derwen.ac.uk 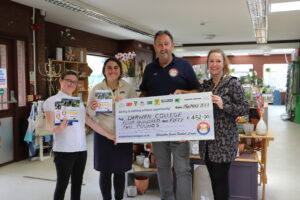