A former Derwen College student has been awarded a British Empire Medal, and a slot on ITV’s This Morning programme presented by hosts Phillip Schofield and Holly Willoughby.

James Beardwell, who has autism, was named as part of the Queen’s Birthday Honours List for his hard work keeping customers safe at his local Sainbury’s supermarket during the pandemic.

James, who works at Sainsbury’s in Chelmsford, was a student at the specialist further education college, in Gobowen, near Oswestry. James followed a Retail pathway at the college for young adults with special educational needs and/or disabilities (SEND).

James’s job at Sainsbury’s involves sanitising trolleys at his local store. He was nominated by colleagues for keeping shoppers safe and making them smile.

The award led to a spot on ITV’s This Morning show. James was invited to speak to television presenters Phillip Schofield and Holly Willoughby, who presented the dedicated football fan with a goodie bag filled with England-themed gifts.

Janet said: “James followed a Retail pathway. I remember him as pleasant, well-mannered and polite, and always well presented. He was hard working and punctual, a real asset to any employer.

“He enjoyed a work experience placement at Iceland in Oswestry, represented college at water polo and football and was an ardent football supporter.”

Simon Roberts, CEO at Sainsbury’s, said that the supermarket was delighted to congratulate James.

“On behalf of everyone at Sainsbury’s, I would like to say a huge congratulations for being awarded the British Empire Medal (BEM) in the Queen’s Birthday Honours 2021.

“James, who is autistic and experiences anxiety, initially found it difficult to adjust to the pandemic. However, he was committed to playing his part in feeding the nation and continued to go above and beyond for our customers.”

“I remember James very well and everyone here at Derwen College is incredibly proud of his achievements. We work hard to support students to reach their aspirations towards employment and maximum independence and love to hear many success stories from former students. However, I think this is the first time that one of our students has been honoured by the Queen!”

“Well done to James, and to all our students and former students who have excelled themselves making us proud during these challenging times.” 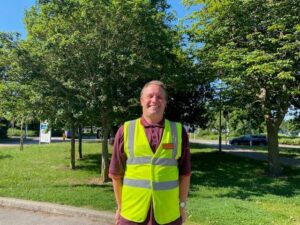