Alex Baxter, 64, was at The Robert Jones and Agnes Hunt Orthopaedic Hospital this morning for a follow-up review, having had both hips replaced last year by his surgeon, Lieutenant Colonel Carl Meyer, who is the director of the Veterans’ Orthopaedic Service.

Mr Baxter, from Shrewsbury, credits the surgery with “giving him his life back” – and believes the newly-completed Veterans’ Centre – which is the first of its kind in the UK – will be a game-changer for meeting the health and care of the country’s large veteran community.

“Carl Meyer got me in and really took me under his wing,” said Mr Baxter, who served in the Royal Navy as a radio operator from 1978 to 1985 before joining the RAF in 1985, where he was commissioned as a Supply Officer. He retired in 2006 with the rank of Wing Commander.
“When he saw me, I was really struggling, and daily life was difficult. Two operations later, and he has given me my life back.

“It’s the little things that really make such a big difference,” added Mr Baxter, who lives with his wife Carol and retriever Alfie, and has three grown-up children. “Things like being able to put my own socks on again. There are a lot of basic things like that which most people take for granted.

“I needed crutches to get about, but I don’t need them at all now – and that was the case within about 10 days of the operations.

“Carl has served in the British Army, and he understands the needs of people in the Armed Forces. His service was already making a difference to hundreds of people like me, and it is wonderful to see this new centre up and running so that he and his team can help thousands more in future.

“It looks fantastic,” said Mr Baxter, who saw service around the world in locations like the Falklands, Bosnia and Saudi Arabia. “I am very honoured to have been the first patient to be seen inside it.”
Creating a dedicated veterans’ centre was a long-standing dream for Lt Col Meyer, and that has now been made a reality – thanks to the support of The Headley Court Charity.

In the main entrance of the building, there is a café and dedicated Veterans’ Hub where Shropshire Council and various military charities will provide support to veteran patients and their family and friends, with issues that range from homelessness, finance, debt management, welfare, post-traumatic stress disorder (PTSD), benefits and more.

The upstairs of the centre includes dedicated research offices, clinical teaching and training space for staff, a multi-disciplinary team room, and an office for admin staff.

“For a number of years, we have talked about veterans being seen in an environment that brings comfort to them and by clinical teams that have an understanding of military personnel and their unique needs,” said Lt Col Meyer.

“This is now reality, and it really does mark the beginning of a new era of bespoke care for our veteran patients and members of the Armed Forces.

“Thanks must go to the Headley Court Charity for their amazingly generous grant, for believing in what we’re doing here and ultimately supporting our long-term vision for world class veterans’ healthcare.” 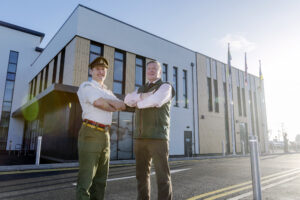