From Welshpool and Oswestry to the National Motor Museum…  Nick Onions’ Ford Model TT bus has travelled far! This year it will be delighting visitors at the Shrewsbury Steam Rally

The lovingly preserved 13-seater country bus EP 1673 wa built on a 1921 Ford Model TT one-ton truck chassis and is a wonderful example of preservation and the golden days of British commercial buses.

Nick Onions, from the County of Salop Steam Engine Society tells the story: “Many rural bus services were inaugurated using vehicles of similar types to this one which worked in public service for 30 years around Welshpool and is particularly remembered for its market day service to Oswestry. This vehicle was acquired for preservation in 1958 and was loaned in 1959 to Lord Montagu to exhibit at the national Motor Museum at Beaulieu for 20 years until 1978, when acquired by present owner in early 1980 it was in poor condition and has now undergone a nut and bolt rebuild. The museum was founded in 1952 by Edward Douglas-Scott-Montagu, 3rd Baron Montagu of Beaulieu.

Additional information: This little bus is fitted with a type of body known in the 1920’s as a six-in-one because it could be built up in various styles, the upper body work is composed of 12 separate parts held together with dozens of bolts and wing nuts. Some of the body styles are:- open truck, 1 ton truck with cab, pick-up with sides, hearse, a char-à-banc and an enclosed bus. This variety of styles enabled the village carrier who first mechanised with this type of vehicle to obtain as many types of jobs in the locality. It is interesting to note the licence plate on the rear indicates that this vehicle was a crown carrier and in fact did collect and deliver the mail.

The chassis was found to be bent but rust free and the engine needed a new head because of frost damage, new valves and piston rings to regain good performance. This bus is fitted with an additional gearbox of the supachord type to increase the standard two speeds to four speeds, probably essential to enable to travel fully laden in the hilly Welsh borderlands. The wooden body is unusually built of a type of Brazilian pine using large14” x 1” planks which are entirely knot free and was in remarkable  sound condition. The only repairs needed were to two windows and the restoration of one door which had been enlarged to enable the previous driver to swing his wooden leg in! The maker of the bodywork is uncertain for although many such bodies were made by local carpenters this particular one shows signs of standardised production. Firstly every component is numbered 23 indicating mass production, and secondly all the steel screws have square socket drives rather than a conventional slot. This type of screw was used in early aeroplane construction and could be put in mechanically and is probably the American scr- lok type.

It has been extensively exhibited all over the country with much interest shown, and can be seen regularly during the summer month attending many local shows and fetes. This vehicle has been in my family for over thirty years and we are delighted to be exhibiting at this year’s Shrewsbury Steam rally at Onslow Park over the August Bank Holiday”.

Full information and tickets are available online from www.shrewsburysteamrally.co.uk 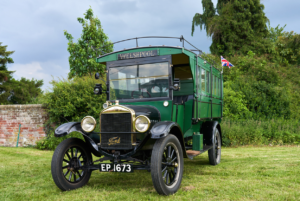