Organisers at Cambrian Heritage Railways (CHR) say they are ‘delighted’ with the public response to what promises to be a memorable Grand Opening weekend next month.

A recent boost in ticket sales for April 2nd and 3rd means the railway is on target to successfully open its doors to passenger services between Oswestry and Weston Wharf for the first time in over half a century.

CHR Chairman Rob Williams said: “We’re delighted with ticket sales to date and public response to our outstanding achievements to bring back to life a bygone era of the railways – something that hasn’t existed for over 50 years.

“We have planned as many trains as possible over the weekend to meet the requirements of those rail enthusiasts and members of the public who want to be part of this unique experience”.

Volunteers from Cambrian Heritage Railways have been hard at work to extend the railway from Oswestry to Weston Wharf since plans were first announced in 2016.  The installation of two miles of new track and a station platform have been part of a major restoration project designed to ensure CHR becomes the latest tourist attraction in the county.

The original railway fell victim to the ‘Beeching cuts’ which happened in the 1960s while other parts of the line became freight-only until the 1980s.  Local heritage enthusiasts came together in 1972 to keep alive memories of Oswestry as a major railway hub.

Having successfully obtained European grants and financial backing from local authorities, the redevelopment of the railway is now part of an ambitious plan to further extend the line towards Gobowen and Llynclys.

If anyone hasn’t got their ticket for the Grand Opening weekend they can still book at: www.cambrianrailways.com.  Prebooking is recommended. 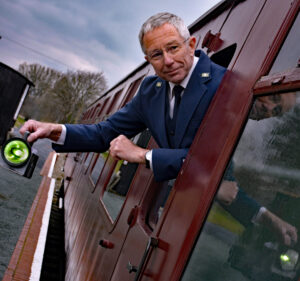