TG Concrete is part of the family-owned Tudor Griffiths Group which already has concrete plants covering the majority of Shropshire, Cheshire and North and Mid Wales.

Now the company has acquired Porthmadog Concrete Limited which has ready-mix plants near Porthmadog and Pwllheli.

TG Group Managing Director, Tudor Griffiths, said the transaction would not affect customer enquiries and orders, and that service would continue with the same professional approach and attitude as in the past.

“This change of ownership will make the quality sands, gravels and aggregates produced at our Cefn Graianog sand and gravel quarry, at nearby Llanllyfni, directly available to all Porthmadog Concrete customers.

“Our entire team is looking forward to continuing to provide both existing and new customers with the same level of support and assistance as before.”

Porthmadog Concrete Limited was originally set up by Robert Griffith and his late father, Hugh, in 1991, and over the last 30 years, the company has developed a strong and vibrant business operating throughout the Llyn Peninsula and West Gwynedd.

“Although standing down as Director and Company Secretary, Robert and Fiona Griffith will continue to be involved on a daily basis, and we’re very pleased to be working with them during this transitional period,” said Tudor.

The latest deal follows on from TG Concrete’s acquisition of a plant from Hanson at Cemmaes Road, near Machynlleth, and the construction of a brand-new plant in Bridgnorth.

“Our growth plans are continuing as we work hard to keep up with increased customer demand and to meet our objective of reaching new customers in an even wider geographical area,” said Tudor. 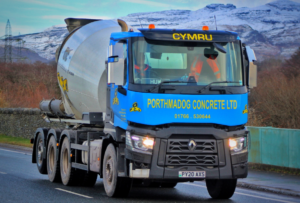 Porthmadog Concrete Limited has been acquired by TG Concrete