Three specialist members of staff at The Robert Jones and Agnes Hunt Orthopaedic Hospital have been named as Health Heroes – after they stepped up to fill an unexpected leadership vacuum.

The Department of Orthotics Manufacturing makes a range of orthotic devices to provide support, control and/or pressure management. They can be used to help people with medical conditions such as diabetes, arthritis and cerebral palsy.

It is highly specialist work, with the dedicated workshop at the Oswestry-based hospital being one of just five in-house NHS teams of its kind in the whole country.

And it is this speciality that presented a big challenge when the departmental manager was suddenly forced to take time off from April. It was a situation that could have left the department in trouble, but the team rallied around, with three especially – Ben Parrish, Steve Bishton and Louise Evans – stepping up to fill the void and ensure the team stayed on track.

Their efforts were so appreciated by Jane Dewsbury, Orthotics Services Manager at RJAH, that she nominated them for the hospital’s monthly Health Hero Award.

Jane said: “Ben, Steve and Louise have all worked extremely hard in the absence of their unit manager, taking on additional tasks to ensure the Orthotics Manufacturing Department continues to deliver everything it needs to – both to Clinical Orthotics and also to their external customers.

She added: “One of their biggest pieces of work has been implementing significant changes relating to health and safety following an assessment and report that was required.

“Throughout this time of change, they have continued to engage with the rest of the team in the department and ensured the team have come together. They should all feel very proud of how they have reacted to a challenging situation to ensure full-service provision.”

The monthly award is presented to unsung heroes from across the hospital who are nominated by their colleagues for going the extra mile.

Ben said: “I’m proud of what we have accomplished. Every member of staff in the Department of Orthotics Manufacturing has done an amazing job over the past few months. We’d like to thank you Jane for the support and putting us forward for an award.”

Steve added: “It is good that our hard work is paying off. It has been a big team effort.”

Louise said: “I wasn’t expecting this at all – I don’t think any of us were – but it is nice to get some recognition for what we’ve done and we’re very grateful.”

The team were presented with their award, consisting of a keepsake certificate, special badge and box of chocolates donated by the League of Friends, by Stacey Keegan, the hospital’s Chief Executive.

Stacey said: “It was great to be able to go out and see one of our teams to give them a much-deserved award for all of their hard work.

“I know it has been a challenging time for the department, but they have really risen to the challenge and delivered some fantastic results.” 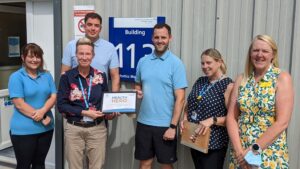