The region’s primary cancer charity has introduced a new member of the team – thanks to the wonderful imagination of a 10-year-old girl.

‘Sunny’ has joined the fundraising team at Lingen Davies Cancer Fund after staff ran a competition calling on local youngsters to design a mascot for the long running charity that works to raise awareness of cancer and supports those impacted by it.

Hundreds of entries were submitted and judges on the panel included globally renowned Charlie Adlard of The Walking Dead comic fame.

Kainat Fatima, who attends Hadley Learning Centre in Telford, was chosen as the lucky winner who received a new IPad donated by Reech Media Agency. The youngster also got to work with designers to see her design come to life, and Sunny made a special appearance at a school assembly last week where he was greeted with cheers and smiles.

Naomi Atkin, CEO of Lingen Davies, said the mascot is an exciting new addition to the fundraising team and will be popping up throughout Shropshire and Mid-Wales at promotional events with the team.

“As part of our LiveLife Cancer Awareness work to help people better understand the signs and symptoms of cancer, we decided a mascot would be a fantastic boost to the team.

“Huge congratulations to Fatima, we were so pleased with the level of entries we received, the imagination of youngsters in our area is phenomenal,” she added. 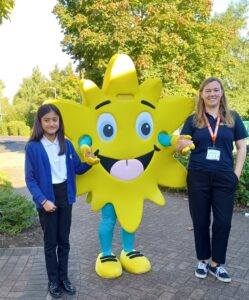