Keeping it in the family for fund raising success

Previous Next
Keeping it in the family for fund raising success

A local firm has narrowly missed out on the title in the World Coracle Championships, but has helped the event to raise over £35,000 for Macmillan Cancer Support.

Tudor Griffiths Group, in Ellesmere, once again took part in the championships on the River Severn in Shrewsbury, but they were narrowly beaten in the semi-finals.

And the four-strong team was certainly a family affair made up of Tudor Griffiths himself, alongside his two sons Harry and Oliver, and TG Builders’ Merchants general manager Mark Evans.

Tudor said: “We are keen supporters of this event, and despite difficult financial circumstances for everyone at the moment, we’re delighted to have raised over £2,500 in vital charity cash this year.

“To have been part of such a fantastic event was incredible and there was such a great team spirit – it was even more special to have both Harry and Oliver by my side too. The Championships are always exciting and, at the same time, the day gives everyone the chance to raise plenty of money for such a deserving cause.

“At Tudor Griffiths Group, we’re grateful to all our supporters who generously back our efforts year on year, and in fact they have been so kind that we are previous winners of The Richard Bayliss Trophy for being top fund raisers.”

Kate Thomas from Macmillan said: “It’s been another special year for the Championships and for our charity, and to have achieved an overall total of £35,469 is just phenomenal. We’d like to thank everyone involved in this year’s race where three records were broken, and special thanks must go to our race sponsors Invertek Drives of Welshpool.”

The World Coracle Championships has been running for over ten years and takes place at the Pengwern Boat Club on the River Severn in the Quarry area in Shrewsbury. It was the brain-child of Richard Bayliss who first persuaded a collection of Shrewsbury companies to paddle the unstable coracles across the river for charity in 2007.

Kate said: “Sadly, Richard himself died of cancer in 2015. The organisers vowed to carry on the championships in support of Macmillan and in memory of Richard, they present the Richard Bayliss Cup to the team who raise the most sponsorship for the event – this year’s winners were Cameron Galliers.”

Since the launch in 2007, the Championships have raised over £355,000 for Macmillan Cancer Support, and next year’s event is already in the diary for Friday, September 8, 2023. 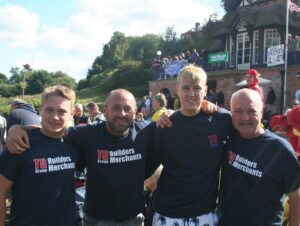