Previous Next
Last chance to join The Big Knit!

With only a few months left, Age UK Shropshire Telford & Wrekin is calling out for knitters and crocheters to join The Big Knit and help raise vital funds to support older people in Telford & Shropshire.

There are plenty of knitting patterns, whatever your ability, including classic beginner bobble hats, crochet options and other fun characters – knitters can even create and design their own.

Thanks to the kind folk at Innocent Drinks, The Big Knit campaign has been extended to June 2022. With this in mind, the charity has set a new target of 7000 hats and hopes local knitters and crocheters will help them with their final push to reach the target.

Heather Osborne, Chief Executive of Age UK STW said: “Every year we love seeing all the different designs come in from stripy bobble hats to grizzly bears. We need everyone to join us and knit as many miniature hats as possible by 30th June 2022 to help us hit our 7000 hat target. It’s such a fun campaign to get behind and it does so much to help older people in our area.”

The Big Knit is a joint campaign between Age UK and Innocent drinks to help vulnerable older people keep warm during the winter. The little hats are then placed on the top of smoothie bottles and for every smoothie sold the local charity receives 25p.

If you would like to get involved in the Big Knit, leave a message for Angela Goodman at Age UK Shropshire Telford & Wrekin on 01743 233123 or email fundraising@ageukstw.org.uk. 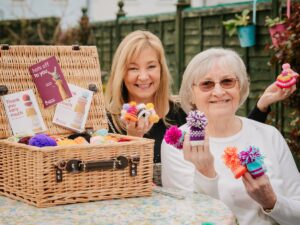