A team of adventurous lawyers from a Shropshire law firm have completed a gruelling challenge to climb the Welsh Three Peaks in less than 24 hours.

The hikers from Lanyon Bowdler conquered Pen y Fan, Cadair Idris and Snowdon – a total ascent of 2,334 metres and a distance of 27.4km – to raise more than £1,000 for two charities.

Paul Ellis, finance director at Lanyon Bowdler, said it had been a real team effort.

“Everyone did amazingly well,” he said. “We all looked after each other in some pretty hot weather and reached all three summits as a team.

“The toughest part was coming down from Snowdon as it was getting quite late in the day, but the mountain leaders were brilliant, doing everything they could to ensure everyone’s safe return.

“It was a great day, and we hope people will continue to recognise the effort everyone made by supporting our charities, ELY Memorial Fund in Herefordshire and Crest in North Wales.”

He added: “We have offices across Shropshire, Herefordshire and North Wales, so we like to support charities in different areas.

“ELY Memorial Fund was set up in memory of Emma Louise Young who tragically lost her life in a road traffic collision, with the aim of helping to relieve the hardship for families within Herefordshire who have lost a son or daughter aged between 17 and 25 in this way. 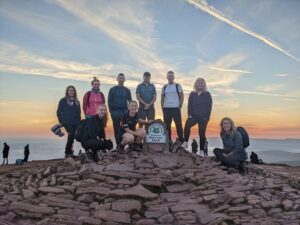 Pictured: The team at the summit of Pen y Fan – the first of the three peaks they completed.