The initiative aims to help raise awareness of the lifesaving pre-hospital critical care provider on the national recognised day for emergency service personnel and to also celebrate the charity’s Air30 30th anniversary.

To shine a light on its lifesaving work, Midlands Air Ambulance Charity is asking local landmarks and businesses with the facilities to do so, to light the skies up in red and show their support of the pre-hospital emergency service.

Emergency Services Day comes as Midlands Air Ambulance Charity is also celebrating Air Ambulance Week, the only week in the year dedicated to raising awareness for the lifesaving work of air ambulance charities, across the UK.

Local landmarks within Shropshire that have already agreed to light the skies red and show their support for Midlands Air Ambulance Charity are:

“To celebrate Emergency Services Day, which is a big day of awareness for our team of pre-hospital emergency medical doctors and critical care paramedics, we would like local landmarks and businesses to get in touch and let us know that they can light up red.”

To get in touch with Maria Jones, email: maria.jones@midlandsairambulance.com and let her know you can support the Light Up Red campaign on Thursday 9th September.

To find out more about Midlands Air Ambulance Charity’s vital, lifesaving work in your local area, visit midlandsairambulance.com and follow the organisation on social media. 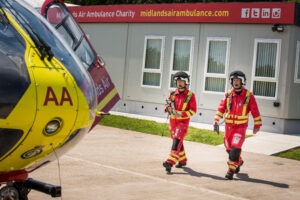