On the evening of the Summer Solstice Cantiones presented a programme of madrigals along with Spring and Summer songs from the bandstand in Cae Glas Park.  The choir’s last official concert had been some 18 months before and it was an absolute joy to be singing again after such a long absence.

Cantiones has been rehearsing virtually with their Musical Director, Martin Bussey throughout the lockdown and there have been rehearsal videos to watch along with weekly zoom practices.  Since May the choir has met weekly over the border to rehearse face-to-face at a safe social distance and wearing masks.  The concert on 21st June offered a wonderful opportunity to sing without masks to a hugely appreciative audience who turned out to enjoy the concert and sat on chairs and rugs despite the threat of rain.

The event was part of Make Music Day which is an annual, international celebration of music held every year on 21 June, now in 125 countries and over 1,000 cities.  The notion to centre concerts in and around bandstands came from Making Music, which is the UK’s membership organisation for leisure-time music, with over 3,700 groups representing around 200,000 music makers across the UK.  As Oswestry enjoys a marvellous park and bandstand it seemed a perfect opportunity to join the national event and invite Oswestry people to enjoy live music from the choir, some of the first since lockdown.

As is always a possibility with a live event, it wasn’t without incident.  The choir had wondered whether including a piece called ‘As Torrents in Summer’ might have been tempting fate and, as if perfectly timed, the music was indeed accompanied by gentle but persistent rain.  The choir’s particular thanks go to those many audience members who raised umbrellas and stoically maintained their positions.

The choir looks forward to continuing its singing and presenting more concerts in the future. 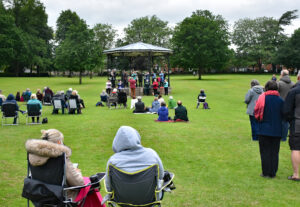