Previous Next
Local award-winning builders trains next generation of craftsmen

A local building contractor has welcomed the next generation of craftsmen with the appointment of three new apprentices.

Louie Bowen, Dan Davies and Jon Goss have all started carpentry apprenticeships with the award-winning builders Pave Aways, based at Knockin near Oswestry and are learning their trade on the new low carbon facilities being built at Harlescott Junior School in Shrewsbury for Shropshire Council.

Sixteen-year-old Louie, a former student at Shrewsbury’s Belvidere School, is following in the footsteps of his carpenter dad Adam who has worked on Pave Aways’ sites as a sub-contractor. His mentor is Max Barnett, who learned his skills from Louie’s dad when he began work at Pave Aways.

Dan Davies, a 17-year-old from Pontesbury, has joined Pave Aways after completing a BTEC Level 2 First Award in Construction at the Mary Webb School and then a Level 1 Diploma in Carpentry and Joinery at the Shrewsbury Colleges Group.

And Jon Goss has stepped up from his role as a multi-skilled labourer at Pave Aways to a dedicated role as a carpentry apprentice. The trio will all be combining on site work with study at Shrewsbury College.

“We were very impressed with Louie and Dan when they did work experience with us,” he said. “It was a natural progression for them to join our team on a full-time basis and we look forward to supporting them through their careers. Jon displayed a natural aptitude for carpentry and, as we are keen to invest in and upskill our employees, the apprenticeship will help him gain the professional qualifications he needs.”

Pave Aways has a strong tradition of bringing on new talent and won the Education and Training award at the 2020 Shropshire Business Awards. It is a member of The 5% Club, a national movement committed to investing in new talent and 23 per cent of its current workforce are apprentices or trainees. 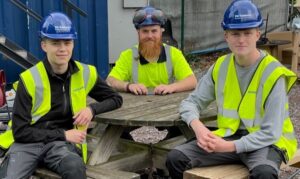