Previous Next
Local charity mixing with the spirits Industry

A local children’s charity, The Movement Centre, is delighted to announce a partnership with a local distillery that is set to raise vital funds for their work with children who have additional needs.

Henstone Distillery are releasing Platinum Jubilee limited editions of some of their spirit range and have pledged to donate £5 from every bottle sold to The Movement Centre. The first of their limited edition spirits, which sold out in just 46 minutes when released at the beginning of February, was the Distillery’s single malt whisky.

Whisky lovers flocked to purchase the single malt, which was limited to 70 bottles, to celebrate the Queen’s Platinum Jubilee in 2022. The bottles were released online at about 6pm on the 9th of February and collectors raced to purchase a bottle, incredibly, all the bottles sold out in record time.

Curtis Langley, Fundraising and Marketing Officer at The Movement Centre said “We are delighted to be working with Chris, Henry and the team at Henstone on this special edition range of spirits for the Queen’s Jubilee. This project will not only raise awareness of our work, but also raise vital funds, and we are so pleased to be the charity to benefit.”

Henstone Distillery, based near Oswestry will release 70 bottles of each of the other spirits in the range, including gins and vodka over the next few weeks, which is very exciting for both organisations. News about the releases can be found on Henstone Distillery’s social media pages and their website but as a hint they are likely to release the Platinum Edition London Dry Gin at 6p.m. on the 23rd of February.

Chris Toller, Director at Henstone Distillery said “We are absolutely delighted to be supporting The Movement Centre with this initiative which was the brainchild of our latest recruit, Henry. Let’s hope the remaining releases are as successful and we can achieve our target of raising more than £2000 for The Movement Centre this year.”

You can read more about the charities work over on their website, and any support is welcome:

And you can find out more about Henstone Distillery on their website: 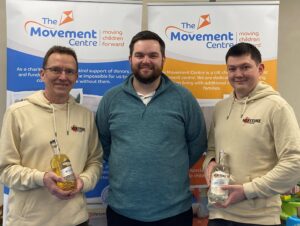