Local singer-songwriter Julius Eastwood has had a whirlwind of a year – fresh out of graduating from University in March he has recorded his debut EP, been a featured musician in Bridgerton season 2, and is now releasing self-written music which was recently played by BBC Radio Shropshire.

Julius released his new single Borderlines in September. Described by BBC Radio’s Michaela Wylde as a ‘gorgeous tune’, the alt-pop ballad has amassed over 2000 streams in its first 2 weeks on Spotify and now features on BBC Introducing. Borderlines is a story about home – it explores Julius’ life growing up on the border between Wales and England, the history of the area, and how this environment has shaped his perspective. He wrote the song after moving to London to study music – the lyrics convey a universal message about how our relationship to home changes once we’ve left. The song comes from a place of nostalgia and explores themes of love, pain and gratitude.

Borderlines combines traditional and contemporary instrumentation to reflect the culture of the area. Julius’ Welsh roots are a major source of inspiration for the song; he drew on its rich history to incorporate a Celtic inspired beat, creating a cinematic feel. The song is a must listen for anyone from the area.

His upbringing and life experience positions him as an artist with a fresh perspective. From a small village on the Shropshire-Powys border, Julius comes from a working-class family, so is very conscious of identity and class. This has informed the lyrical themes of his music – from politics to identity and everything in between. Growing up on the borderline has shaped his view of the world and is at the very core of his new single – ‘it’s something I continue to explore – I’ve watched my music & lyrics develop alongside it’.

Julius is best described as an alt-pop singer and songwriter. He is a classically trained saxophonist, but since moving into contemporary music he has also become a self-taught pianist and vocalist. Julius’ work has been compared to artists such as Declan McKenna and Nick Cave. His musical influences range from contemporary artists like Marina, Tom Odell and Lana Del Rey, to artists that were played by his parents as a child – Zero 7, Fleetwood Mac and Eagles.

Julius moved to London in 2018 to study music at University, where he graduated. His debut single, Westminster’s on Fire was selected as Track of the Week by BIMM Online.

In an exciting turn of events, Julius got the opportunity to play the trumpet on season two of Netflix’s Bridgerton, released earlier this year. Donning a powdered wig and a red-tailed coat, he got to work on one of the largest TV shows as his first job in music. He found the whole experience fantastic, saying, “The ballroom stage was magical, like no set I’ve ever been on before.” He went on to say that the cast and crew were incredible, and he particularly enjoyed getting into costume every morning. What a fantastic opportunity for local talent!

Julius recently announced that his debut EP will be coming out early next year – he has told us that it includes four brand new songs and features an exciting shift in genre. The songs are introspective and focus on the idea of personal transformation. This informed his production choices, “I want the songs to exist in an ethereal soundscape; this EP is inspired by producers like William Orbit and acts such as Moby and The Verve.” Julius’ work so far has definitely established himself as an artist to watch, and we can’t wait to hear his upcoming EP.

You can follow his music journey on social media @julius.eastwood on TikTok and Instagram. You can also listen to his first two singles, available on all music platforms. 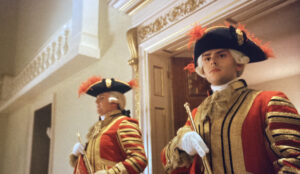