Marathon runner aids charity as thank you from his family

The son of a Shropshire wheelchair user is to take part in his first marathon to raise money for a charity that supports people with life-changing illness or injury.

Tom Watkin’s father Marcus Watkin from Shrewsbury was left paralysed and in a coma in 2002 when his motorcycle was hit by a motorist driving on the wrong side of the road. Tom and his brother George were just 8 and 5-years-old.

Marcus is a leading fund raiser for the West Midlands Air Ambulance but also spent 14 years as a trustee of the Ethos charity which helps wheelchair users achieve an independent life.  The registered charity runs three bungalows in Oswestry which provide adapted accommodation and support for people with life changing injury or illness as well as help to find a new permanent home to suit each client’s needs.

Tom, 27, who works as an acoustic consultant in Leeds, is tackling the Asda Foundation Yorkshire Marathon on October 17.

“Fundraising for Ethos is a token of appreciation for the hard work that so many have put in. Ethos is such an important organisation but is often overlooked so I felt I wanted to do my little bit to help,” said Tom.

He first started running when he was working for four years in China as an English language teacher. His first 10k run was on the Great Wall of China and it sparked a love for the sport.

“I did the David Goggins 4 X 4 X 48 last year which is basically an ultra-marathon spread over two days.  It was a real challenge, but I raised over £1,000 for the air ambulance.

“After that I was determined to do my first marathon as soon as I could and raise money for other organisations that help others in the same situation as my dad,” said Tom.

He explained that his family had received huge support after his father’s accident and had helped the family get through a very difficult time.

“My mother Ann was a rock. She slept at my dad’s bedside in hospital until he came out of his coma. I have a massive respect for both my parents and take a lot of my inspiration from them,” he said.

Tom has already started his training for the Yorkshire marathon combining his running with kick boxing and weight training. He aims to complete the marathon in under four hours and raise as much money as possible for Ethos. And he already has his eye on the next target.

“I want to complete an official ultra marathon before my next birthday – possibly an off-road trail race,” he said 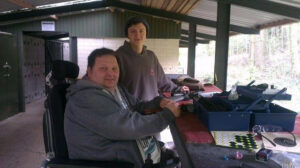