Today the Mayor of Oswestry, Councillor Jay Moore, paid tribute to James Bond and Andrew Sharman in recognition of their longstanding friendship to the Town Council and dedication to their respective roles.

The Mayor said “Oswestry Town Council is able to deliver the services it does, the events it delivers and support the groups who do so much for our community because of the partnerships, relationships and friendships it has established over many years. Our two guests of honour here today epitomise those friendships. Mr James Bond and Mr Andrew Sharman have both demonstrated longstanding dedication to their respective roles and I am pleased to be hosting this civic reception in their names. Having heard that they were both stepping back a little bit I wanted to make sure that the Council had an opportunity to say thank you.”

James is a longstanding friend of Oswestry Town Council and is the frontman for one of the Councils busiest events – Christmas Music Live. Described by many as Oswestry’s BBC Shropshire legend, James has decided to hang up his microphone after over three decades of service.

He has often supported Oswestry Town Councils work, whether its talking about the family silver, hosting public meetings or planning OTC events. He goes about his work professionally, is fun to work with and has a deep love for the town of Oswestry, which shines through whenever you speak to him. James Bond is a true friend to Oswestry Town Council.

Andrew has been a key player in the Oswestry Talking Newspaper for almost 20 years, and is one of the many stalwarts behind the amazing work that the group do. Never one for the limelight, Andrew is a technician – an expert – and I’ve even heard the term wizard. Andrew helped to digitalize the system, and since then has remained at the helm and kept moving it forward. Andrew is always polite and courteous to staff, always focussed on the solution rather than the problem and someone who always has a glint of mischievousness in his eye. Andrew is a true friend to Oswestry Town Council.

The Mayor added “who better to tell us a bit more about Andrew than Mrs Sharman, Helen”

Also a leading light in Oswestry Talking Newspaper Helen highlighted the role that Andrew has played, finishing her speech Helen said “I am very proud of him.” 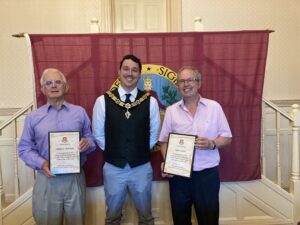