The 2020 Paralympic Games in Tokyo saw the Great Britain Wheelchair Rugby Team win the first-ever team sport gold medal for GB in the 61-year history of the Games – and part of this winning team were four patients from the Midland Centre for Spinal Injuries (MCSI).

Coach Paul Shaw and Assistant Coach Darren Matthews are part of the coaching staff who led the team to gold, and Jim Roberts and Ryan Cowling are two players part of the medal-winning team.

MCSI is based at The Robert Jones and Agnes Hunt Orthopaedic Hospital (RJAH) in Oswestry and is one of eleven designated to receive and treat spinal cord injured patients in the country, serving a catchment of North Wales, Mid Wales, South Mersey, Cheshire, and the West Midlands.

Paul said: “I first came to MCSI in November 1991 after sustaining my spinal cord injury, and that’s when wheelchair rugby became a passion of mine. In 1995, I first represented GB and continued to play until 2008. I then turned my skills to coaching and became Head Coach of the GB team in 2013.

“As well as the euphoria of winning the gold medal, the final whistle was also a hugely emotional moment for everyone who has been part of our incredible journey.

“We had a lot of support from our families, friends, club mates, fundraisers, sponsors, and many more. We wanted to give back to everyone and I am so proud of the team for becoming wheelchair rugby Tokyo 2020 Paralympic gold medal winners.”

Team GB played the Paralympic final against the USA, winning 54-49. Jim, who is also team captain and originally from Welshpool, led the way by scoring 24 tries.

Jeanette Jones, MCSI Generic Worker, dedicated 20 years of her spare time to being a member of support staff for the team.

She said: “I finished with the team prior to London 2012 – I absolutely loved being part of the team. My role with them took me all over the world with some of the highlights being the Paralympic Games in Athens, Sydney and Beijing.

“My role involved helping the players and coaching staff with whatever they needed. It sometimes involved caring duties or even supporting with equipment on the court.

“I was thrilled when they won gold in Tokyo. I was watching the game with a group of MCSI patients on the unit and we had a great time. There’s not a team who deserve it more.”

Mr Joy Chowdhury, Consultant Surgeon in Spinal Injuries and Rehabilitation Medicine and MCSI Clinical Lead, said: “I’d like to say a huge congratulations to the team for winning gold in Tokyo – what an achievement for them all!

“I’m especially proud of our former MCSI patients – Paul, Darren, Jim and Ryan. Exercise and sport are a vital part of rehabilitation for our spinal injury patients, and they should all be proud of themselves for representing Team GB at the Paralympics.” 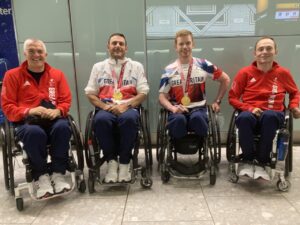 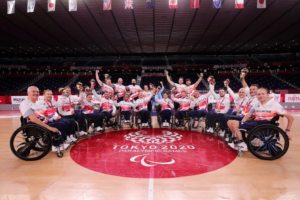