A garden of reflection and memorial has been unveiled at The Robert Jones and Agnes Hunt Orthopaedic Hospital (RJAH) as a lasting tribute to a much-loved and highly regarded Professor.

Professor Richardson’s Memorial Garden has been created in memory of Professor James Richardson – known affectionately to his colleagues and patients as ‘Prof’.

The beautiful garden is located within the courtyard outside the hospital’s Baschurch Day Unit.

The scale of the garden was made possible by generous donations, including £10,000 from the hospital’s League of Friends, £1,500 raised by Helen Cotter, a former patient of Professor Richardson’s and £1,000 from The Mary Hignett Bequest Fund.

Many members of staff have helped to make the garden possible from members of the hospital’s Estates team helping to support its creation, with additional assistance from colleagues in the Trust’s IT department and Patient Environment Action Team (PEAT), Horatio’s Garden and League of Friends volunteers.

Professor Richardson passed away suddenly at the age of 62 in February 2018. His untimely death came just a matter of months after a rare treatment for a type of arthritis in the knee – work which Professor Richardson had been at the forefront of – known as Autologous Chondrocyte Implantation (ACI) won official approval by the National Institute for Health and Care Excellence (NICE) to be funded by the NHS.

Long-time friend and colleague of Professor Richardson, Mr Andrew Roberts, Consultant Orthopaedic Surgeon and Clinical Chair for Support Services, said: “In February, it was three years since the sudden death of our dear friend and colleague, Prof, and despite the length of time passed, we all still miss him enormously, which is why this special garden has been created.

“The amount of people from all different departments and teams in the hospital, who have worked together to create this wonderful space is a true reflection of how loved and respected Prof was by the entire hospital community.”

Mark Brandreth, Chief Executive, added: “Professor Richardson’s memorial garden is an absolutely beautiful space, one which we know will mean the world to all of his colleagues and friends, who miss him dearly.

“Thank you to every single person involved in the creation and the ongoing upkeep of the garden. It’s been a real team effort and as Andrew said – a true testament to the impact he had on us all.

“A big thank you must also go to Shona and the family for their tremendous support and efforts in helping us to make this happen. It’s appreciated by all at RJAH.”

Victoria Sugden, League of Friends Charity Director, added: “Professor Richardson was a true gentleman, who was loved and highly respected by all of the RJAH family; the garden reflects our affection for him and his inspiring work.

“We have been pleased to offer our support in helping the Trust create such a tranquil space and warmly thank everyone involved in making it possible.”

A film documenting the making of the garden has been produced by local student Thomas Farrell from Wem, to celebrate its opening. The film can be found here: https://www.youtube.com/watch?v=6-7Tz9aTXek 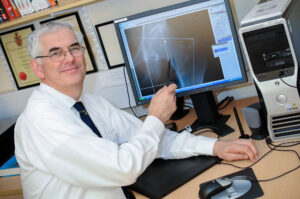 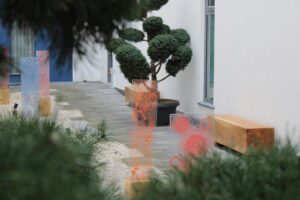