Morrisons to spread and celebrate HOPE in Oswestry

Previous Next
Morrisons to spread and celebrate HOPE in Oswestry

Morrisons Oswestry has given away hundreds of paper chain links in the lead-up to the Platinum Jubilee in a nationwide initiative to spread a million messages of hope across local communities.

Morrisons Community Champions have partnered with local schools, charities, and community groups to gather messages of hope and celebration, and to decorate the paper chain links. The paper chains will be donated to community hubs, schools and care homes to be used as Jubilee decorations, and to be displayed in Morrisons stores.

The initiative has collected over one million messages of hope from across the nation that, if joined up, could almost stretch from Buckingham Palace to Windsor Castle and back twice over.

But that’s not all. Morrisons Community Champions across the UK will also be recognising nearly 2,000 organisations and individuals for their contributions to their local communities. Morrisons Oswestry will be celebrating:

Customers can share their nominations for the People’s Choice award, on the Morrisons Oswestry Community Champions Facebook page, but they must act quickly as entries close at midnight on the 29th May. The award winners will be contacted the following week.

Rachael Roberts Oswestry Community Champion for Morrisons, said: “It has been a challenging year for many people in the UK and we want to help spread hope and positivity amongst our customers and communities. Kiley Waters Oswestry Community Champion for Morrisons said “The Platinum Jubilee is a time for celebration and we hope – through our paper chain messages and community awards – that we can help celebrate hope in the run-up to the long-awaited weekend.”

Morrisons recently announced that packs of Cornflower seeds, that represent positivity and hope for the future, will be given away in every store nationwide. Shoppers will be able to get a free pack at the checkout and online whilst stocks last. Community Champions will also distribute packs amongst local schools, care homes and community groups too. 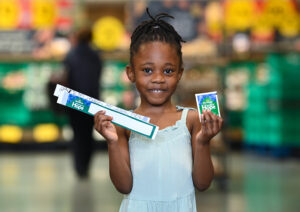